First As Farm-raised Coral Spawns In The Wild Off The Florida Keys; 'A Great Big Circle Of Life' 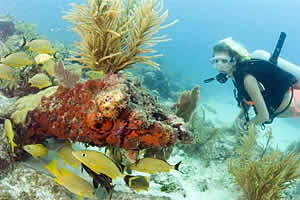 KEY LARGO, Florida Keys -- Students working with marine scientists in the Florida Keys National Marine Sanctuary have documented the first known case where Atlantic-Caribbean, farm-raised coral have reproduced to serve as a foundation for future reefs.

The discovery is significant because it proves that cultured staghorn corals can not only survive, but also reach sexual maturity and naturally help with coral restoration, marine researchers said.

“This is real exciting because this is the future of trying to rebuild these reefs,” said Ken Nedimyer, president of the Coral Restoration Foundation and has been involved in coral restoration projects for the past nine years. “What we’re trying to do is to put the girls and the boys back together in the same room so they’ll make babies.”

Both staghorn, as well as elkhorn corals, are classifed as “threatened” under the federal Endangered Species Act and historically are primary reef-building corals in Florida and the Caribbean, said Billy Causey, southeast regional director for the National Oceanic and Atmospheric Administration’s marine sanctuaries.

Part of the SCUBAnauts International education group, 21 Tampa Bay-area secondary school students authenticated and collected some of the gametes broadcasted from farmed coral at Molasses Reef off Key Largo Saturday and Sunday nights.

Harvested staghorn gametes were taken to a shoreside laboratory for further research and they’ll be used for laboratory fertilization projects with the aim of eventually transplanting offspring.

“This is very much like a great big circle of life, “ said Dr. David Palandro, a research scientist for the Florida Fish and Wildlife Conservation Commission and head of the SCUBAnauts program. “Corals were transplanted here and we’re collecting the gametes from those transplanted corals and we hope to take those gametes and transplant them someplace else.”

Under several federal research permits, Nedimyer harvested small, inch-long fragments of live staghorn and planted them in a special nursery off the Upper Keys in the spring of 2006. Working with a different group of students In July 2007, the more mature clippings were transplanted in a section of sand at Molasses Reef where they have grown to about two feet in diameter.

“We’re growing a lot of corals in our nursery and we can replant them on some reefs, but we could never replant all corals on all the reefs,” said Nedimyer. “The goal is to get them reproducing successfully, so they can do what they used to do.

Nedimyer said that coral larvae are carried by ocean currents after they spawn, which in the northern hemisphere is usually a few days after the full moon in August or September.

For students participating in the project, the experience provided more than a scientific lecture.

“All we see on land is how animals reproduce, but we don’t really know what goes on underwater,” said Nick Johnson, a high school senior from Dunedin, Fla., “It was awesome.

“I’d say it was like a bunch of pink ‘Dip ‘n Dots’ floating around,” he said.

The SCUBAnaut group is to continue their dives off the Keys through Tuesday afternoon.