Study: Moles and Shrews Can Smell Underwater; 'Odorant Molecules are all Water Soluble'

Shark Smell Myth Found Fishy: No Better Than Other Fish At Sniffing Blood In The Water 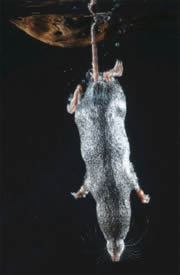 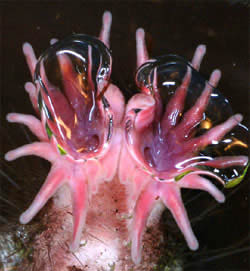 The star-nosed mole in mid-sniff underwater. Photo by Kenneth Catania

NASHVILLE, Tennessee -- A Vanderbilt researcher has discovered that some stealthy mammals have been doing something heretofore thought impossible -- using the sense of smell under water.

The results of the research by Vanderbilt’s Kenneth Catania, assistant professor of biology, were reported Dec. 21 in the science journal Nature. He became curious when he observed that a mole he was studying blew a lot of bubbles while swimming.

“This came as a total surprise because the common wisdom is that mammals can’t smell underwater,’ said Catania, who earlier this year won a $500,000 “genius grant” from the John D. and Catherine T. MacArthur Foundation.

Catania devised a series of experiments to determine whether the star-nosed mole and another small, semi-aquatic mammal - the water shrew - can smell objects underwater. Using a high-speed camera, he discovered how they do it.

After observing that the moles were blowing bubbles out of their nostrils and then sucking them right back in, he determined they were exhaling and inhaling the bubbles rapidly, between five and 10 times per second. That is about the same rate as the sniffing behavior of comparably sized land mammals, like rats and mice. “Rats and mice don’t sniff the way we do,” Catania said. “They push air ‘out-in out-in’ in a fashion strikingly similar to what the star-nosed mole is doing, except that it is doing it under water.”

Catania mounted a high-speed video camera so that it pointed up through the bottom of a glass tank. Then he stuck various objects on the bottom of the tank – pieces of earthworm, small fish, insect cuticle and blobs of wax and silicon – and observed the moles’ behavior. He saw that, when the moles approached one of these targets, they would blow bubbles that came into contact with the target’s surface and then were sucked back into the nostrils.

“Because the olfactory nerves in the nose are covered with mucous, odorant molecules are all water soluble,” Catania said. “So, when these bubbles come into contact with an object, it is almost inevitable that odorant molecules will mix with the air and be drawn into the nose when the bubble is inhaled.”

Just because the moles are getting whiffs of interesting odors underwater doesn’t necessarily mean they smell them.

So Catania devised some additional tests.

To determine if the mole can identify edible objects by sniffing alone, Catania created underwater scent trails leading to food and recorded how well the moles’ could follow them. To keep the moles from using their tactile star, he put a grid-work between the animals and the scent trails. The openings in the grid were too small for the star appendages to squeeze through but large enough so the air bubbles could pass without difficulty.

When the grid was replaced with a screen with openings too small for the air bubbles to pass through, however, the moles’ performance dropped down to the level of chance – the same as their performance with no-scent trails.

In order to see if this capability was limited to the star-nosed mole or if other small semi-aquatic mammals also have it, Catania captured some water shrews and began testing them. He found that they also exhibit this underwater sniffing behavior and can use it to follow underwater scent trails.

“Now, the question is, ‘What other semi-aquatic mammals do this?’” Catania said. “Do animals like otters and seals do anything similar? Or is there a size limit and it only works for smaller mammals?”

He hopes that publication of his paper will encourage researchers who are studying all kinds of semi-aquatic animals to take a closer look at how they are using their noses underwater.

The research was funded by a Faculty Early Career Development (CAREER) award from the National Science Foundation.