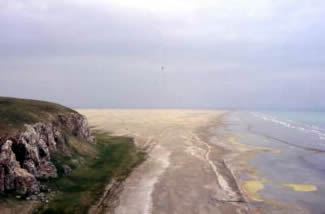 Naked carp that grow in the increasingly salty water of Lake Qinghai have adapted by changing their physiology.

CHICAGO, Illinois -- A groundbreaking study reveals an unanticipated way freshwater fish may respond to water diversion and climate change. Endangered naked carp migrate annually between freshwater rivers, where they spawn, and a lake in Western China, where they feed and grow. However, Lake Qinghai is drying up and becoming increasingly more saline--leading to surprising adjustments to the carps' metabolic rate.

Naked carp take seven to ten years to reach reproductive size. Although historically abundant, overfishing and destruction of spawning habitat through dam-building caused the species to become endangered during the 1990s. Diversion of water for agriculture from the lake has been compounded by climate change, leading to a decline in water level in the lake of 10–12 cm per year during the past fifty years (see accompanying image).

However, Chris M. Wood (McMaster University) and coauthors found that naked carp respond to the increased salinity of the lake water in a surprising way--by taking a "metabolic holiday." In the first forty-eight hours after transitioning from the freshwater river system to lake water, the carps' oxygen consumption falls --eventually reaching just 60 percent of that in river fish.

Both gill and kidney functions also decline. The sodium/potassium pump (Na+/K+-ATPase), which is a protein critical for cellular function, operated at only 30 percent of its capacity in lake-water fish compared to river-water fish. Ammonia-N secretion by the kidneys declines by a surprising 70 percent, and urine flow decreases drastically to less than 5 percent of its rate in the freshwater river water.

"In other words, the kidney changed from an organ which excreted water at a greater rate than salt in river-water, to one which conserved water relative to salt in lake-water," explain the researchers.

"The MO2 [oxygen consumption] data indicate that the cost of living for the naked carp is 40 percent lower in lake-water than in river-water, and that this difference is almost complete within twelve hours after transfer," write the authors. "The magnitude of this response is remarkable."

But they caution, "If the lake continues to dehydrate, these benefits may change to pathology."