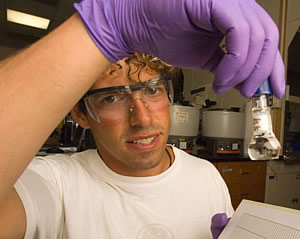 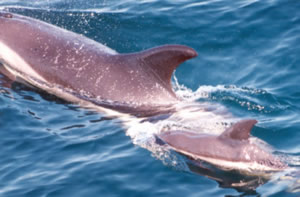 WOODS HOLE, Massachusetts -- The most extensive study of pollutants in marine mammals’ brains reveals that these animals are exposed to a hazardous cocktail of pesticides such as DDTs and PCBs, as well as emerging contaminants such as brominated flame retardants.

Eric Montie, the lead author on the study currently in press and published online April 17 in Environmental Pollution, performed the research as a student in the Woods Hole Oceanographic Institution-MIT Joint Graduate Program in Oceanography and Ocean Engineering and as a postdoctoral fellow at the Woods Hole Oceanographic Institution (WHOI). The final data analysis and writing were conducted at College of Marine Science, University of South Florida, where Montie now works in David Mann’s marine sensory biology lab.

Co-author Chris Reddy, a senior scientist in the WHOI Marine Chemistry and Geochemistry Department, describes the work as “groundbreaking because Eric measures a variety of different chemicals in animal tissues that had not been previously explored. It gives us greater insight into how these chemicals may behave in marine mammals.”

The work represents a major collaborative effort between the laboratories of Reddy and Mark Hahn in the WHOI Biology Department, where Montie was a graduate student and post doc, as well as Robert Letcher at Environment Canada. Montie traveled to Environment Canada in Ottawa to learn the painstaking techniques required to extract and to quantify more than 170 different pollutants and their metabolites. He then brought the methods back to WHOI and performed the analyses in Reddy’s laboratory. Reddy describes the methods as extremely unforgiving and explains, “This is not making Toll House cookies. The fact that Eric pulled it off so seamlessly is amazing considering that he did this by himself far away from Ottawa.”

Montie analyzed both the cerebrospinal fluid and the gray matter of the cerebellum in eleven cetaceans and one gray seal stranded near Cape Cod, Mass. His analyses include many of the chemicals that environmental watchdog groups call the dirty dozen, a collection of particularly ubiquitous pesticides that were banned in the 1970s because of their hazards to human health. But the Montie study goes much further in the scope of contaminants analyzed. And many of the contaminants are anything but benign.

The chemicals studied include pesticides like DDT, which has been shown to cause cancer and reproductive toxicity, and PCBs, which are neurotoxicants known to disrupt the thyroid hormone system. The study also quantifies concentrations of polybrominated diphenyl ethers or PBDEs (a particular class of flame retardants), which are neurotoxicants that impair the development of motor activity and cognition. This work is the first to quantify concentrations of PBDEs in the brains of marine mammals.

The particular hydroxylated PCB found at these soaring concentrations, called 4-OH-CB107, has some serious side effects. In rats, it selectively binds to a carrier protein called transthyretin, which has been found to be abundant in cerebrospinal fluid in mammals. This protein plays a role in thyroid hormone transport throughout the brain, though its exact role is not known. Thyroid hormone plays a key role in the development of the brain, as well as sensory functions, in particular hearing in mammals. Compromised hearing would have significant impact for dolphins, because as Montie points out, “these animals rely on hearing as their primary sensory modality to communicate and to find and catch food.”

Just how these chemicals might impact marine mammal health is something Montie plans to pursue. This summer, Montie, Mann, and Dr. Mandy Cook (from Portland University) will partner with scientists from NOAA to test the hearing in dolphins living near a Superfund site in Georgia and compare it to dolphins from locations where ambient concentrations of pollutants are significantly lower. Montie is also working with Frances Gulland, director of the Marine Mammal Center in Sausalito, CA, to examine how California sea lions’s exposure to PCBs may increase their sensitivity to domoic acid, a naturally produced marine neurotoxin associated with “red tides.”

The work of Montie and his colleagues lays the groundwork for understanding how environmental contaminants influence the central nervous system of marine mammals. Montie sees this work as the forefront of a new field of research, something that might be called neuro-ecotoxicology. For years, most of the work in this area focused on how concentrations of marine pollutants affected the animal’s immune system or its hormone systems. The research by Montie, Reddy, Hahn, and their coauthors provides tools to ask deeper questions about how the ever-growing list of contaminants in the ocean affect the neurological development of marine mammals.

And what sort of results does Montie expect this new field of neuro-ecotoxicology to produce? “I think we don’t really know the brunt of what we are going to see in wildlife.”