New Apparatus Developed To Measure The Density Of Ultra-pure Water

Canada Fights Ban on 'Bulldozers of the Sea'; Minister Calls Measure 'Not Appropriate' 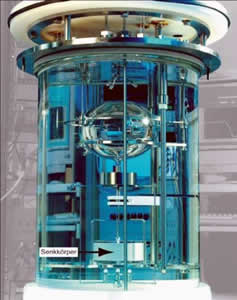 View of the Magnetic Floatation Equipment

BRAUNSCHWEIG, Germany -- For oceanography – and there in particular for the description of ocean currents – accurate measurements of the density of sea water are of great importance. For this purpose, measuring instruments are needed which reach an uncertainty of approx. 0.001 kg/m3 (relative 1 Â· 10–6). To be able to calibrate these measuring instruments, ultra-pure water is required as a reference fluid – the density of which can now be measured with the required accuracy over a large temperature range by means of the Magnetic Flotation Method which has been further developed at PTB.

Normally, the hydrostatic weighing method is used for measuring the density of liquids. Thereby, the density of the liquid is determined by means of Archimedes' principle from the buoyancy which is experienced by a sinker that plunges into the fluid. This method has several disadvantages which become apparent especially when water is to be measured. For this method, an open fluid tank is required into which the sinker – hanging on a wire – plunges. At the point where the wire passes through the surface of the liquid into the water, a meniscus forms which, in the case of water, is extremely difficult to be reproduced and therefore contributes significantly to the measurement uncertainty. Along the wire, a temperature gradient occurs which, too, increases the measurement uncertainty. Due to the open system, the gas content of the water is difficult to control, but it alters the density.

In order to eliminate these sources of uncertainty, an apparatus has been developed in which the wire has been replaced by a magnetic coupling. In this magnetic flotation system, a small magnet is mounted at the holder of the sinker. By means of this magnet, and with the aid of a controllable magnetic field produced by an electromagnet, the sinker is kept in a fixed position. The current needed for this purpose is a measure for the buoyancy that is experienced by the sinker. The fluid tank can almost be shut as the liquid is linked with the outside world only via a thin pipe by means of which the pressure can be regulated. In this way, it is possible to measure also with fully degassed water.

Thanks to the fact that the above-mentioned sources of uncertainty are avoided, measurements can be carried out with a repeatability standard deviation of approx. 2 Â· 10–7. The total measurement uncertainty of the water density measurement therefore reaches a value below 1 Â· 10–6. The measurements carried out with this new apparatus could confirm to a large extent the values delivered by foreign colleagues. However, there are still discrepancies in the temperature range around 4 Â°C, which is of great importance especially in oceanography. Therefore, there is still a great need for further research in this field.