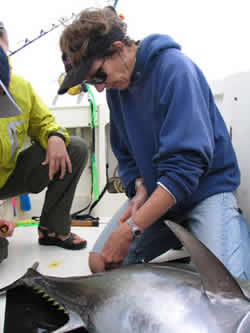 AMHERST, Massachusetts -- New fish-tagging studies of young bluefin tuna in Atlantic waters off New England by researchers at the University of Massachusetts Amherst are offering the first fishery-independent, year-round data on dispersal patterns and habitat use for the popular game fish. The availability of miniaturized pop-up satellite tags suitable for smaller (two- to five-year-old) fish helped make the research possible.

Fisheries oceanographer Molly Lutcavage and lead author Benjamin Galuardi say the work shows that scientists now have tools to directly observe bluefin tuna annual migration patterns and vertical habitat use (depth) in the Atlantic and Mediterranean oceans in detail not possible in earlier studies. This new information should lead to better understanding of bluefin tuna ecology, catch patterns and management of wild stocks that provide a multi-million dollar sport fishery from Maine to North Carolina.

Lutcavage, director of UMass Amherst's Marine Research Station and the Large Pelagics Research Center (LPRC) in Gloucester, says, "Our tagging data are important because for the first time we've got direct measurements of bluefin tuna movements and habitat associations. In other words, their travel routes, depth and temperature patterns, and where they intersect with recreational fisheries."

Galuardi, an LPRC scientist and doctoral candidate in the Graduate School of Marine Science at UMass Dartmouth, led the analysis of data returned from pop-up satellite tags used in this study, as well as oceanographic conditions across bluefin migration paths. Details are reported in today's issue of the Public Library of Science One (PLoS) journal.

"Knowing the dispersal patterns of these young fish after they leave their nursery grounds and learning their year-round habitat needs are important goals for the commercial fishery of adult bluefin tuna, as well," she adds. For example, these tunas' winter and spring movements and behavior of juveniles have largely been unknown until now.

For this study, Lutcavage, Galuardi and fishermen partners deployed 58 miniature pop-up satellite archival tags (PSAT) and 132 implanted archival tags on juvenile Atlantic bluefin tuna between 2005 and 2009. Because only one archival tag was retrieved, data reported are mainly from 26 PSATs.

To deploy the PSATs, fish were caught by hook and line and brought aboard the boat to attach a miniaturized PSAT to the fish's fin by a tether and dart anchored at the base of the fin. These were programmed to record external temperature, depth and daily position based on light sensor readings every 15 minutes and to release after 12 months. Later models also recorded light level. Once at the surface, the PSAT tags transmitted the collected data to receivers on earth-orbiting satellites. The data were then transmitted to the researchers, allowing scientists to trace the fish's journeys and habitat over the previous year.

The authors report that all tagged bluefin tuna remained in the northwest Atlantic for the duration observed, and, in summer months they stayed in coastal waters from Maryland to Cape Cod out to the continental shelf. In the winter, they wandered more widely, exiting the Gulf of Maine and ranging south to the South Atlantic Bight (North Carolina to Florida), the northern Bahamas and the Gulf Stream edge.

"These findings are the first long-term view into a year in the life of a juvenile bluefin tuna in the western Atlantic," Lutcavage notes. "The geographic and vertical concentration of summer habitat had been suspected due to patterns in the recreational fishery, but was not confirmed until this study. In addition, little information existed on what these fish did in winter months when the fishery does not operate. This information provides a window into what areas and conditions are important for growth and survival of juvenile bluefin tuna."

The work was supported by the National Oceanic and Atmospheric Administration.