Oldest Fossil Brain Found In Kansas And Imaged In France; 'It Is Really Bizarre' 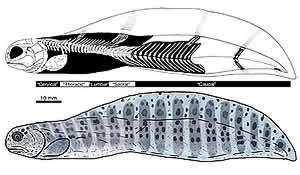 CHICAGO, Illinois -- For decades, scientists believed that a spine with multiple segments was an exclusive feature of land-dwelling animals. But the discovery of the same anatomical feature in a 345-million-year-old eel suggests that this complex anatomy arose separately from -- and perhaps before -- the first species to walk on land.

Tarrasius problematicus was an eel-like fish that lived in shallow bodies of water in what is now Scotland, in the Carboniferous period between 359 million and 318 million years ago. Like many fish, Tarrasius was thought to have a vertebral column divided simply into body and tail segments. But in a new description of Tarrasius published in Proceedings of the Royal Society B, Lauren Sallan describes a five-segment column much more similar to the spinal anatomy of land-dwelling animals called tetrapods, including humans.

The surprising find argues against a common assumption paleontologists use to determine from fossils whether an ancient species lived on land or in water.

"It's the last trait to fall," said Sallan, a graduate student in the Program in Integrative Biology at the University of Chicago Biological Sciences. "First, limbs were thought to show that a species was on land and walking, and now the vertebral morphology doesn't mean that they're on land either. So a lot of the things we associate with tetrapods actually arose first in fishes, and this is another example of that."

Tetrapods, which include the first species to walk on land as well as all modern mammals, reptiles, birds and humans, possess vertebrae organized into five distinct segments. From head to tail, the spinal vertebrae can be categorized into cervical, thoracic, lumbar, sacral and caudal sections, each with its own characteristic anatomy.

By contrast, fish vertebrae are typically categorized anatomically into two segments: caudal and pre-caudal. But the spinal column of Tarrasius shows a complexity more like that seen in tetrapods, with five segments separated by abrupt transitions.

"The morphology is just completely different in each series of vertebrae," Sallan said. "Like a tetrapod, you can tell which segment you're looking at from the basic morphology."

When Sallan began her research on Tarrasius, she wasn't looking for an unusual spine, but rather how the species fit evolutionarily among other early ray-finned fishes. While examining undescribed fossils at the National Museums Scotland in Edinburgh, Sallan found some unexpected features. Instead of the flexible notochord characteristic of most ancient fish species, Tarrasius possessed heavy vertebral bones organized into five anatomically distinct sections.

Armed with this new anatomical information, Sallan re-examined many other fossils of the species and detected evidence for spinal complexity that researchers previously had missed.

"This was in a different museum from where most of the specimens are, and previous workers had just been looking at the same fossils over and over," Sallan said. "It's basically an issue of finding what you expect to be there instead of what's actually there."

The appearance of tetrapod-like spinal organization in a ray-finned fish shatters the presumed relationship between complex vertebral anatomy and both walking and terrestriality. The eel-like Tarrasius possessed no hind fins and a long dorsal fin, indicating it used its surprisingly intricate spinal column for swimming, not walking. And while Tarrasius lived several million years after the first tetrapods with hands and feet, the discovery of these spinal features in a fish species confirms that this anatomy can evolve separate from the evolution of walking behavior.

"You can't use this trait to say that something was definitely on land or to identify a tetrapod, which is the way it is used in the field now," Sallan said.

Instead, the commonalities suggest that similar environments or other selective pressures may produce convergent evolution of this complex spinal organization. It also questions whether tetrapod-like expression of a family of factors responsible for body patterning -- the Hox genes -- is ancestral for both vertebrates and fishes, or truly essential for the development of these spinal segments. Since most knowledge about the relationship between Hox genes and body pattern development is based on genetic studies of modern tetrapods, the new finding emphasizes the need for more testing in fish species.

"Part of the problem is that the Hox expression data is available only for a few model organisms," Sallan said. "What's really needed is some expression data from other ray-finned fishes and tetrapods, things that are not mouse and chick and zebrafish. We need to try to get the full diversity of Hox expression."

It's also unclear how Tarrasius used its unexpectedly intricate spinal column in its daily life. Sallan speculates that the bony vertebrae may have been useful in propelling the fish's body during fast swimming, similar to the stiff vertebrae of modern marlins.

"I think it must help with stiffening the body, because the tail is so flexible," Sallan said. "If you look at the general shape, it's more like a tadpole or an early tetrapod, so it might just function to hold the body steady because the tail is flapping."

The paper, "Tetrapod-like axial regionalization in an early ray-finned fish," will be published May 23 by Proceedings of the Royal Society B. Sallan is the sole author on the article. Funding for the research was provided by the National Science Foundation, the Palaeontological Association, the Paleontological Society, the American Society of Icthyologists and Herpetologists, and the Evolving Earth Foundation.