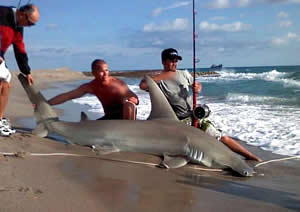 The fishermen, who were not identified, were fishing from shore, and they released the shark before it was weighed.

Sharks have been gathering along the beach in the annual chase of baitfish.

The beach was closed Friday after the hammerhead was caught. Lifeguards also closed Ocean Reef Park on Thursday because of sharks.

Hammerheads, with their T-shaped heads with an eye on each side, feed on fish, stingrays, skates, and other sharks.