NOAA To Work With Six Nations To Address Illegal, Unreported, And Unregulated Fishing 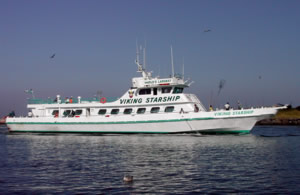 The operators, Steven N. Forsberg and Viking Starship Inc. of Montauk, N.Y., and Jerome E. Hurd of Avalon, N.J., have been charged by NOAA with taking their patrons to catch striped bass in federal waters, where capture of the prized sport fish is prohibited.

During the undercover operations, federal agents and state officers posed as patrons on several charter vessels operating in New York and New Jersey.

Striped bass are one of the most sought-after species for both commercial and recreational fishermen from Maine to Cape Hatteras. The popularity of this fish, the complex nature of its migration, and its decline in harvest and recovery, led to significant management efforts in state waters by the Atlantic States Marine Fisheries Commission, and a ban on fishing in federal waters since 1990.

Forsberg and Viking Starship, the operator and owner of the FV Viking Starship, has been notified by NOAA of the charges of fishing, harvesting, possessing and retaining Atlantic striped bass illegally from federal waters, and submitting false oral or written statements about the catch to authorized federal officers. The agency also issued to Forsberg a notice of a potential $30,000 fine and a 30-day permit suspension for the alleged violations.

Hurd has been notified by NOAA of the charges of fishing, harvesting, possessing and retaining Atlantic striped bass illegally from federal waters, and then submitting false oral or written statements about the catch to authorized federal and state officers. The agency also issued to Hurd a notice of a potential $25,000 fine.

Violations of federal fishery rules are civil, not criminal matters. Disputed allegations are heard before an administrative law judge, whose decisions can be appealed to the NOAA administrator and through the federal court system.