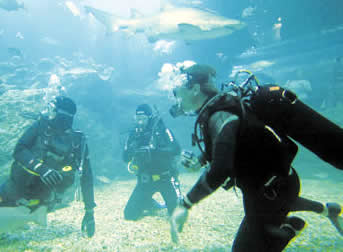 The sharks at Siam Ocean World aren’t all that interested in humans, unless provoked.

BANGKOK, Thailand -- Forget film festivals and Armani suits: no shopping complex can compete with Siam Paragon’s latest attraction, “The Ultimate Dive with the Ultimate Predator,” which lets those with nerves of steel dive into an aquarium full of sharks. The maiden voyage of this one-of-a-kind attraction was last Thursday at Siam Ocean World in the basement of Siam Paragon, Bangkok’s latest temple to the shopping gods.

Although you may think sharks are better on the menu or in the lining of your suit (sharkskin, anyone?), this is your chance to get thrown into the deep end. And it is certainly deep – the dive takes place in a three million-liter tank in the Deep Ocean exhibit. The aquarium’s fiberglass rocks were artist-designed, but all the marine life, from the algae to the three-meter sharks, is real. Films such as Open Water and Jaws have fostered the modern collective fear of sharks and have made the prospect of diving into a shark aquarium seem unthinkable, if not incredibly dangerous, for many people. And didn’t we learn from James Bond in Thunderball to stay out of shark tanks?

Sound scary? Don’t be chicken. “The most dangerous thing that could happen is to bump into a rock, but that’s why we’ve got you all padded up,” says Robin Lloyd, one of the friendly fellows from Planet Scuba who leads the dives. Everyone is provided with all the necessary equipment, including a full-body wetsuit with hood, gloves and boots. Divers without certification must do a morning training session in a nearby pool before taking the plunge, and certified divers who have not gone on a dive in the past 12 months must take a refresher course.

In an open-water dive in the ocean, there is no guarantee that you will see any of these magnificent animals, so it’s an opportunity to view unforgettable marine life wherever you turn. Like a gift basket, this selection of nature has been packaged carefully by human hands for ultimate enjoyment. Dive packages range in price from 5,300 to 6,600 baht, depending on your level of scuba diving experience.

Scuba diving at Siam Ocean World is better than the real thing in terms of the variety of species one can see within a single 30-minute dive. “I’ve been diving all over for twenty years, but many of these animals I had never seen before,” notes Rob Mort, who works in the aquarium’s curatorial department. Shark species in the tank include leopard sharks, tawny nurse sharks, bamboo sharks and ragged-tooth sharks imported from Africa. None of these sharks will attack people unless seriously provoked, but once in the water, that knowledge does not necessarily protect you from the primal fear of big, pointy teeth. The ragged-tooth sharks stare at you with their small yellow eyes and show you their mouth full of needle-like teeth, but they only go for prey that they can eat whole since, fortunately, their teeth are not shaped for sawing. Quite harmless to divers, the tawny nurse shark is so large that it can be frightening to approach. It’s three meters long, the largest animal at Siam Ocean World.

But there aren’t just sharks to make you wet your wetsuit. The giant grouper is as intimidating a creature as some of the sharks. These one-meter-long bigmouths can swallow lobsters, turtles and even small sharks whole. Perhaps the most curious looking animals in the tank, the spotted eagle rays, have faces that are almost human and glide gracefully through the water looking strange and beautiful.

It’s not just the fish that are getting all of the attention. Before a group of divers goes into the water, Robin reminds them that they will have an audience. “We want to look good,” he says. Visitors can watch the scuba divers mingling with the sharks as they walk through the breathtaking tunnel that cuts through the Deep Ocean tank in a bizarre underwater catwalk. Divers can expect waving people and flashbulbs popping as they swim up and over the tunnel. Knowing that diving behind glass is as much about being seen as it is about seeing the fish, the aquarium has come up with a clever promotion – friends and family get discounted tickets if they come to see you dive.

The owner of Siam Ocean World, Oceanus Holdings, has four other aquariums in Asia and Australia, three of which also offer diving with sharks, but this is their first aquarium inside a shopping mall. The location guarantees a steady stream of visitors who are lured in by the glamor of shopping at Paragon and easy access to the Skytrain. Over 300,000 people have visited the aquarium since it opened on December 9. On a single day over the weekend, Ocean World sees 8,000 to 10,000 visitors, mostly Thais living in Bangkok.

“I don’t want people to come here once and feel like they’ve seen all there is to see,” says Siam Ocean World’s marketing manager Kantaporn Tongman. Ocean World plans to roll out new products frequently to keep ichthyophiles coming back for more. “This year the focus is on sharks,” says Kantaporn. “There is a new shark-related attraction planned for March or April. I can’t say what it is right now. It’s confidential.”

A hint may be in the large brown sacs suspended in a tank near the pipefish. A sign reads that these are leopard shark eggs set to hatch next month.