Researchers: Acid Rain Has A Disproportionate Impact On Coastal Waters; 'It's Affecting The Ocean' 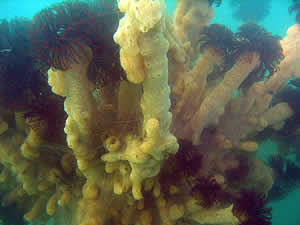 CORVALLIS, Oregon -- An aggressive, invasive aquatic organism that is on the state's most dangerous species list has been discovered in both Winchester Bay and Coos Bay, and scientists say this "colonial tunicate" â Didemnum vexillum â has serious economic and environmental implications.

Its propensity to foul surfaces of boats, fishing nets, water intakes, docks and buoys could make it costly to control, and its ability to smother shellfish beds and sensitive marine environments threatens other marine life.

"This is not a welcome addition to our bays and now the clock is ticking," said Sam Chan, an invasive species specialist from Oregon State University and chair of the Oregon Invasive Species Council. "The fouling potential from tunicate invasions can be severe, given its ability to reproduce asexually by budding, or breaking off as fragments, and through sexual reproduction where tadpoles emerge, swim and attach themselves to surfaces to form new colonies.

"Didemnum vexillum was found in Puget Sound several years ago and the expense for treating this invasive species can be quite high," added Chan, who is affiliated with the OSU-based Oregon Sea Grant Extension program. "So it is important to determine how widespread the invasion may be."

A team of scientific divers, coordinated by the Oregon Coast Aquarium, will begin looking in Newport's Yaquina Bay â and perhaps other locations â for colonies of Didemnum vexillum.

The Didemnum invertebrates were first discovered in Winchester Bay, and later in Coos Bay. They are native to Japan and can live from the estuary to the continental shelf. In calm water, colonies may grow in long, beard-like expanses on substrates such as docks, mooring lines, boat hulls and aquaculture infrastructure.

In faster currents, Didemnum forms low, undulating mats overgrowing seabeds of pebbles, boulders and jetty rock. The organisms will grow over, and choke clams, oysters, mussels, anemones and other marine creatures by covering their feeding siphons, and can serve as a barrier between bottom-feeding fish and their prey.

What most concerns scientists, Chan said, is that the tunicates' reproduction cycle begins during the next two months, increasing the chances that colonies will spread. Didemnum is on the list of "100 Worst Invasive Species to Keep out of Oregon."

Between 2007 and 2009, the Washington State Department of Fish and Game spent $850,000 managing the tunicate invasion in Puget Sound, Chan pointed out.

The Winchester Bay tunicate patch was discovered earlier this year by Lorne Curran and Fritz Batson, while Curran was surveying marine life for the organization, REEF. They spotted the organisms in an area called "the triangle" â an enclosed portion of the lower bay shaped like a wedge of pie. Curran photographed the tunicates, and contacted Chan, who then shared the images with tunicate expert Gretchen Lambert, and others, who confirmed the identification.

On April 26, Curran and several divers from the Oregon Coast Aquarium surveyed nearby Salmon Harbor Marina in Winchester Bay to see if the invasion had spread across the bay â and to their relief, it had not. But that relief was short-lived when they returned to the triangle and found that the tunicate colonies appeared to be thriving.

"It appears that the infestation is growing rapidly," Curran said. "Where in February I saw mostly one-foot-square colonies, this time I encountered more colonies that were two-foot to three-foot square." The tunicates were found on both jetty rocks and on some of the mooring lines and "stringers" of an oyster-growing facility in the triangle.

As Chan was working with scientists, community officials and divers on the Winchester Bay discovery, he received word that a second invasion had been discovered by University of Oregon scientist Richard Emlet in the Charleston Boat Basin in Coos Bay. Emlet notified Oregon Department of Fish and Wildlife shellfish biologist Scott Groth, who contacted Chan.

"Based on the size and morphology of both Didemnum vexillum populations, we think they probably became established at roughly the same time â about two years ago," Chan said. "The origin is still unclear and we have to be careful not to point fingers."

Chan said tunicate infestation can be introduced through a variety of vectors, including boats and aquaculture.

The Oregon Department of Fish and Wildlife is in the final stage of a risk assessment. When completed, recommendations will be made and an action plan developed.

"We're reviewing the literature for successful eradication projects on rocky outcrops or jetties, but we're not finding a lot," said Rick Boatner, ODFW's aquatic invasive species coordinator. "This is new ground for Oregon, and we'll have to be creative with our solutions."

Chan and ODFW officials say the best approach may be to establish a pilot "adaptive learning" control and monitoring project within the triangle in early summer before water temperatures warm enough to trigger the tunicates' reproductive cycle. Support for such a project may come through an "Invasive Species Control" fund established by the Oregon Legislature and signed by Gov. Ted Kulongoski in 2009. The Oregon Invasive Species Council must declare an emergency to activate this account, Chan said.

Possible methods of eradication include "smothering" the colonies, physically removing them and vacuuming all traces, or applying a vinegar and/or bleach solution. The Oregon Invasive Species Council will hold workshops in affected coastal communities later this spring to inform the public about tunicates before the pilot control project begins.

"The colonies I observed were all of that cream color and had a sort of undulating soft, lobed or folded appearance in some areas," she said, "while more of a flat mat in others. I saw them not only on the mooring lines (of the oyster facility) but also on the stringers themselves â and on the shellfish."

Despite their invasive nature and ability to "foul" marine structures, tunicates also are being studied as a natural product for unique compounds that may have biomedical applications.