Ebb And Flow: Ancient Tides Quite Different From Today -- Some Dramatically Higher 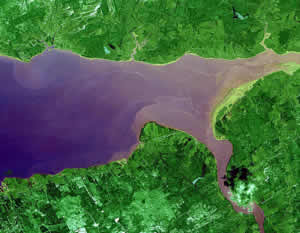 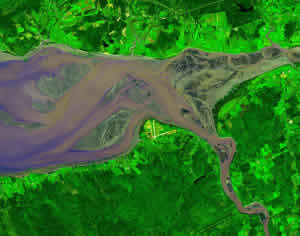 CORVALIS, Oregon -- The ebb and flow of the ocean tides, generally thought to be one of the most predictable forces on Earth, are actually quite variable over long time periods, in ways that have not been adequately accounted for in most evaluations of prehistoric sea level changes.

Due to phenomena such as ice ages, plate tectonics, land uplift, erosion and sedimentation, tides have changed dramatically over thousands of years and may change again in the future, a new study concludes.

Some tides on the East Coast of the United States, for instance, may at times in the past have been enormously higher than they are today â a difference between low and high tide of 10-20 feet, instead of the current 3-6 foot range.

And tides in the Bay of Fundy, which today are among the most extreme in the world and have a range up to 55 feet, didn't amount to much at all about 5,000 years ago. But around that same time, tides on the southern U.S. Atlantic coast, from North Carolina to Florida, were about 75 percent higher.

The findings were just published in the Journal of Geophysical Research. The work was done with computer simulations at a high resolution, and supported by the National Science Foundation and other agencies.

"Scientists study past sea levels for a range of things, to learn about climate changes, geology, marine biology," said David Hill, an associate professor in the School of Civil and Construction Engineering at Oregon State University. "In most of this research it was assumed that prehistoric tidal patterns were about the same as they are today. But they weren't, and we need to do a better job of accounting for this."

One of the most interesting findings of the study, Hill said, was that around 9,000 years ago, as the Earth was emerging from its most recent ice age, there was a huge amplification in tides of the western Atlantic Ocean. The tidal ranges were up to three times more extreme than those that exist today, and water would have surged up and down on the East Coast.

One of the major variables in ancient tides, of course, was sea level changes that were caused by previous ice ages. When massive amounts of ice piled miles thick in the Northern Hemisphere 15,000 to 20,000 years ago, for instance, sea levels were more than 300 feet lower.

But it's not that simple, Hill said.

"Part of what we found was that there are certain places on Earth where tidal energy gets dissipated at a disproportionately high rate, real hot spots of tidal action," Hill said. "One of these today is Hudson Bay, and it's helping to reduce tidal energies all over the rest of the Atlantic Ocean. But during the last ice age Hudson Bay was closed down and buried in ice, and that caused more extreme tides elsewhere."

Many other factors can also affect tides, the researchers said, and understanding these factors and their tidal impacts is essential to gaining a better understanding of past sea levels and ocean dynamics.

Some of this variability was suspected from previous analyses, Hill said, but the current work is far more resolved than previous studies. The research was done by scientists from OSU, the University of Leeds, University of Pennsylvania, University of Toronto, and Tulane University.

"Understanding the past will help us better predict tidal changes in the future," he said. "And there will be changes, even with modest sea level changes like one meter. In shallow waters like the Chesapeake Bay, that could cause significant shifts in tides, currents, salinity and even temperature."