Study: Narwhal's Mysterious Tusk a Giant Sensor; 'Such a Finding is Startling' 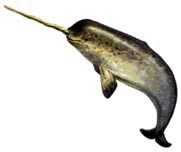 WASHINGTON, D.C. -- The narwhal‘s mysterious spiral tusk works as a giant sensor to help it test water qualities and to smooch other narwhals, a U.S. researcher said on Tuesday.

The tusk, it seems, has hydrodynamic-sensing capabilities, Nweeia said in a statement released ahead of his presentation to the Conference on the Biology of Marine Mammals in San Diego.

The mammals are among the rarest of whales, usually 13 to 15 feet long, found mostly in the Arctic Ocean waters of Canada but as far east as Russia.

Nweeia‘s team found that the narwhal tusk is like a membrane with an extremely sensitive surface. It has 10 million nerve connections to the outer surface that would be capable of detecting changes in water temperature, pressure, and salinity.

"There is no comparison in nature and certainly none more unique in tooth form, expression, and functional adaptation," Harvard said in a statement.

Anyone with sensitive teeth who has bitten into an ice cream would wince.

"Why would a tusk break the rules of normal development by expressing millions of sensory pathways that connect its nervous system to the frigid arctic environment?" Nweeia asked. "Such a finding is startling and indeed surprised all of us who discovered it."

Nweeia‘s team also noted that narwhal males will rub tusks and said it was likely this provided the big animals with a "unique sensation."

"Now that we know the sensory capabilities of the tusk, we can design new experiments to describe some of the unique and unexplained behaviors of this elusive and extraordinary whale," said Nweeia.