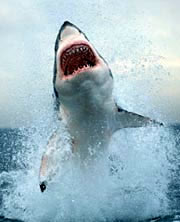 Photographers Chris and Monique Fallows spent an hour towing a decoy to get this shot. 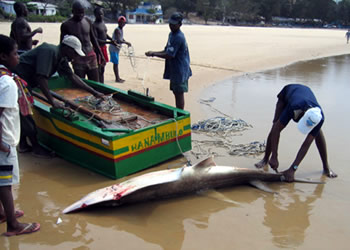 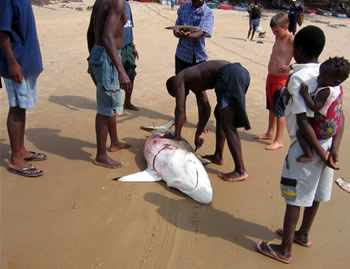 To all involved in the battle against shark finning.

Mozambiquean colleagues of ours sent us yet again more disturbing images of finning taking place on an ongoing basis. We are getting similar images almost on a weekly basis from all over East Africa and also including South Africa.

The sad and simple truth is governments in South Africa and in many other countries within Africa do not seem to be bothered by this state of affairs. As a result I have sent this plea to either spread the word of this abuse or suggest ways in which we can remedy it. We have on numerous occasions over the last 5 years had meetings with the South African body known as Marine and coastal management who are in charge of monitoring the resources along our coast. To date a lot has been said but very little delivered. We cannot sit around and wait any longer.

Marine and coastal management are well aware of the problem but cross border politics and a lack of urgency are once again retarding efforts to send up vessels to help the huge shark long lining problem. East, Southern and West Africa's sharks are vanishing before our very eyes at alarming rates. On the East coast of Africa alone over 200 dedicated shark longline vessels of Asian origin are currently targeting shark for their fins whilst millions in Africa starve. Any one of these vessels is capable of catching over 100 tons of sharks per trip, offloading to factory ships and then catching and finning again.

In South Africa we also do not seem to realize the need for adequate shark resource management and enforcement. An example of this was MCM issuing permits to fish pelagic sharks off our coast 4 years ago as an experimental fishery even though no base line data existed on the size of the target species populations etc. They simply went ahead and issued these permits and now these permit holders are entrenched and are highly successful catching many tons of makos and blues per trip. Getting rid of them from a legal point of view is now going to be very difficult.

South Africa has been a signatory to various policies such as the World Summit, UN meetings and others stating our willingness to conserve resources and manage them sustainably for the future, yet nothing is being done to stop the most wasteful practice, namely, shark finning.

In Mozambique and other parts of Africa, Asian business men offer poor local fishermen money for fins and so create a market for this very wasteful fishery. For hundreds of years these fishermen depended on the ocean to feed their families often utilizing sharks as a food source and had a low impact that was sustainable. Today traditional fishing is becoming unsustainable due to huge numbers of foreign flagged boats raping the coast lines of these poor countries to catch sharks for their fins as well as other threatened species such as billfish, turtles etc. The result is starving families not able to catch their daily meal whilst just a few miles offshore large numbers of sharks are stripped of their fins and dumped back into the ocean.

What is needed is a immediate ban on shark longlining off the South African coastline as well as the Mozambiquean coastline and declaring sharks a no take species. The future of sharks as well as other species hangs in the balance if rapid action is not taken. If South Africa and Mozambique lead the way and the benefits can be seen countries such as Tanzania, Namibia, Angola, Kenya and others will follow suit.

South Africa has 4 state of the art patrol vessels purchased with the specific purpose of marine protection yet none of these vessels are actively attacking this huge problem with only a small handful of arrests being made. Not for a moment am I attacking the people who run these boats however it is blatantly obvious that a hell of a lot more could be done from higher powers who govern spending on enforcement exercises that these boats were built for.

Great white sharks being the glamour species they are have tremendous amounts of money being spent on scientific projects in South Africa to study their movements and other behavior, however little money on their protection. Five different research projects are currently being done on this single species by 5 different researchers yet nothing on any other species which are in more need than the white sharks. In fact many of the main prey species of the white shark are shark species which are heavily targeted by the shark fishery and over the last 5 years have almost disappeared from areas where they were once abundant, any person can surely see a problem in the making. Sharks as a whole need to be looked at immediately and energy needs to be concentrated into this field. Can you imagine the great plains of Africa only having herds of Wildebeest and Zebra and no predators, well this scenario is rapidly going to occur in the ocean if nothing is done soon and whilst I am no scientist I am sure big problems lie ahead as a result of the removal of apex predators.

Mozambique has a large tourism related income each year that is directly related to diving and yet this golden goose is being allowed to be slaughtered, not by local people but by foreigners in the name of greed for a meal that is the table fare of the rich.

What needs to be done to stop the small scale poaching as depicted in the images is to give these locals alternatives. Perhaps local dive or game fishing operators could try to start a directed shark diving/viewing/tag and release project with the local people involved so that they can govern their own living cash cow and see the value of a living shark as is done in the Maldives, Bahamas and elsewhere.

As far as I know no shark fishery has ever been sustainable over the long term and all have gone through the same boom and bust cycle.

Shark diving however is a huge industry worldwide and rapidly growing. At the same time, the resource is rapidly shrinking making the potential for shark diving in these areas even more lucrative in times to come. Mozambique has such great potential from a marine eco-tourism point of view yet this is being ignored in favor of short term gain.

Each week I return many emails from concerned people on this shark longlining issue. Howerver, I can honestly say whilst many of us have small victories, I feel nothing is being done with regards to the larger picture that we as individuals have little control over.

South Africa has the potential to really make a stand against this rape of our oceans through the use of our patrol vessels to arrest and confiscate these illegal boats therefore sending out a clear message of zero tolerance. Mozambique and other African nations do not have the resources of South Africa and as such are unable to fund running costs for these vessels which our government appears unwilling to do.

My plea therefore is if any of you can contribute through your contacts, your magazines, film companies, private resources or personal influence to helping this issue in any way, be it exposure, finance or experience, please do so. Many of you do not live in Africa, yet have visited our shores and know of the great beauty and potential which I know can still be saved now if action is taken.

Help expose this problem, hopefully through this exposure will come the need for action by those in a position to make a difference.

South Africa has the opportunity to set a precedent for others to follow. We can lead the fight against this unsustainable rape of our oceans.

If any of you would personally like to make suggestions to the South African department of Marine and coastal management or get comment from them on why this issue is being allowed to run rampant please address your contributions to Marcel Kroese who is highly involved with enforcement at MCM and is one of the few individuals really dedicated to stopping this sort of activity. He will be able to pass it immediately onto the relevant parties who are holding up a concerted effort to take action Mkroese@mcm.wcape.gov.za or he can pass it onto the Minister of Environmental Affairs and Tourism and see exactly what is going on and be accountable if no action is taken.

Many thanks for your support.

On behalf of Thousands of shark and marine conservationists who want to make a difference.