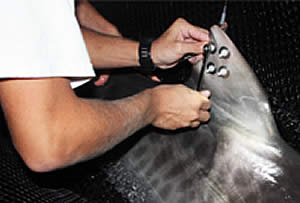 One type is a satellite tag that includes a GPS receiver and transmitter, and signals via satellite the location of the shark. The other type is a small acoustic tag or pinger that transmits a signal that can be detected by a permanent or hand held receiver, so showing that the animal is near.

The acoustic tags (pingers) can be used to detect movements on a finer scale, providing a more detailed picture of the behaviour and movement of the tiger sharks while they are in Cayman. They will show which sea areas they actually use, and at what time of day.

The sharks, a ten feet female called Tina and a seven feet younger, immature female Luiza, will help the researchers understand their species' migration patterns, movements and behaviour when they are in Cayman.

"Both of them seem to being doing fine. Tina has reported in several times a day while moving around the island; she seems to be deep during the day, coming into shallower water at night to look for the stingrays and turtles on which these species normally feed," said lead researcher Dr. Mauvis Gore.

"Tiger sharks like many other species are increasingly endangered, as a result of intense overfishing globally. In fact large shark species are becoming so scarce globally that in many countries they are either fully protected, or else their fishing quotas have been reduced to zero," she added.

Only in the last few years have scientists discovered that tiger sharks can make extensive annual migrations between countries or even across oceans. The tracks revealed by the satellite tags results will show whether the tiger sharks that are sometimes observed in the Cayman Islands move around or between the islands, and whether, as suspected, they are here for only part of the year, and then migrate elsewhere.

International efforts to protect dwindling shark populations have come to the fore in the last few years because of the dramatic crash in shark populations that has taken place globally. Unlike bony fish, sharks mature very slowly and reproduce only once every one to two years, producing only a small number of pups. Yet over the last decade or two 70 million sharks per year have been fished and killed, almost entirely for their fins that are in demand as a component of sharks' fin soup.

"Even if we agree to exploit sharks," said Dr. Gore. "We want to do it sustainably, not in this crazy way that will see the resource completely destroyed in another 10 years. As it is, sharks are now far more valuable in the sea, than in the fishing boat. Divers will pay good money to dive in places where they have a chance of seeing such iconic wildlife, and the same sharks can be seen over and over again - whereas once it's dead that's it, and it fetches very little in the market."

"Tiger sharks are one of my favorite animals;" added Guy Harvey, whose Ocean Foundation provided the satellite tags, and who helped the team catch Luiza.

"They are the most handsome of all the sharks, and I just love painting them. It's just unfortunate they have these stripes that give rise to their name, making people think they are much more dangerous than they really are."

Guy, a well-known artist and local resident, has also assisted with tagging of tiger sharks in Bermuda and the Bahamas.

The tiger shark study is part of a project that is being undertaken by a team from Marine Conservation International led by Dr. Gore. The project is funded by UK Overseas Territories Environment Programme (OTEP) together with the Cayman Islands Department of Environment, the Save Our Seas Foundation, and the Guy Harvey Ocean Foundation. The team have been working in the Cayman Islands over the past year and a half to assess the species and abundance of species of both sharks and rays as well as whales and dolphins.

"We are very pleased with the preliminary results of this work," stated Gina Ebanks-Petrie, Director of the DoE, "it is our duty to manage our marine environment in the best interests of the people of the islands; it makes sense to find ways of managing our resources so they benefit us in the long-term, not destroy them; and we also have international obligations to protect these threatened species."

Sharks, because of media "hype" and their "Jaws" image, often cause public concern. But shark attacks on man are in fact very rare, typically causing only 4 - 6 fatalities throughout the whole world per year.

The resident project officer Mr. Oliver Dubock explained that people's fear of sharks was greatly exaggerated. "Of course they can be dangerous," he said, "but no more than fierce dogs. You need to know how to behave and how to handle them. Just as an example, in Florida on average over 70 people per year die from boating accidents, but less than one every two years as a result of shark attack."

Tim Austin, Deputy-Director at the DoE, added "We plan to keep people informed about the behaviour of Tina and Luiza. We hope to be able to keep the press updated with maps of their migrations. Of course it is essential that they are not harmed. All past experience has shown that killing local tiger sharks does not get rid of them; others simply come in from elsewhere. We urge fishermen and divers to join this important conservation effort and help look after these two beautiful animals."