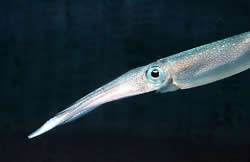 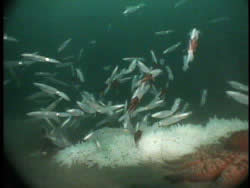 MONTEREY, California -- California’s $30-million-a-year squid fishery has quadrupled in the past decade, but until now there has been no way to assess the continuing viability of squid stocks. A multi-institutional team of scientists this month reported a new sonar technique to locate squid egg clusters in the murky depths, offering a window onto next year’s potential squid population in its nursery.

The scientists demonstrated the new sonar methods off the coast of Monterey, California, where fishermen harvest squid in April and May as the squid return annually to spawn and lay clusters of finger-sized egg capsules on the seafloor. The scientists learned how to distinguish subtle sound signals reflected off gelatinous egg clusters and the adjacent sandy seafloor, and they could detect egg clusters less than 20 inches (0.5 meters) across.

“This method provides an efficient way to map distributions and estimate abundances of squid eggs and monitor them year to year to get a census for next year’s population,” said Kenneth G. Foote, a marine acoustics expert at Woods Hole Oceanographic Institution (WHOI) in Massachusetts and lead author of an article published in the February Journal of the Acoustical Society of America. “It has immediate potential to give resource managers sound scientific information to make decisions on how to sustain the fishery. Otherwise, they’re just guessing.”

The researchers developed and tested the new sonar methods off Monterey, where squid fishing begun in the 1860s has intensified as other fisheries have declined and the market for squid has increased, Hanlon said. Every spring squid (Loligo opalescens) return to spawn a few hundred yards offshore, near Cannery Row, in waters 65 to 200 feet (20 to 60 meters) deep. They deposit capsules, each containing 150 to 300 embryos, which are attached to each other, first forming small clumps called mops that later cluster into egg beds up to several meters in diameter. The primary spawning ground in Monterey covers an area of about four square miles (10 square kilometers).

Surveying the underwater squid nursery with divers or underwater cameras is too difficult, time-consuming, and expensive, the scientists said. Using the new sonar methods, the entire Monterey spawning area could be surveyed in less than 40 hours at relatively low cost, with a suitably equipped boat towing a sidescan sonar.

Solving the problem first required a way to detect squid eggs. Hanlon approached Foote, who was game to try but not initially optimistic. “You have to be able to distinguish weak signals echoing off small targets from powerful signals echoing off much larger targets,” Foote said.

The team conducted experiments by towing a sidescan sonar with the CSU Seafloor Mapping Lab’s research vessel MacGinitie. They tested different ways to tune sound wave frequencies, adjust the angle of the sonar, and tow it at various speeds and heights off the seafloor—all in an effort to optimize signals reflected back from the egg clusters. Foote analyzed the raw acoustic data to tease out signals representing egg clusters and seafloor and translated the sound data into images.

Hanlon said the sonar method provides a crucial tool for estimating how well squid are reproducing, learning more about squid behavior, and identifying ways to monitor a valuable fishery while protecting a species that is a key link in marine food chain. Squid are a staple in the diets of 19 fish, nine bird, and two marine mammal species. They are also a popular restaurant item as calamari.

Since fishing usually commences as soon as squid appear nearshore in Monterey Bay, fishermen may be catching large numbers of squid before they have a chance to spawn, Hanlon said.

“Fishing while squid are actively mating and laying eggs can remove certain sizes and sexes of squid schools and interfere with complex sexual selection behaviors that are crucial to the gene flow and vigor of the population,” Hanlon said. “If we can detect when the egg clusters appear, then wait a few days for the squid to spawn, we can help ensure that squid can complete their mating cycle. That way, they will lay enough eggs to provide squid to fish next year, and the squid gene pool will continue to flow by natural, not unnatural, selection.”

“We aim for this technique to help create a win-win situation,” he said. “Fishermen harvest the same amount of calamari this year and in future years, and meanwhile we don’t interfere with squid population genetics and have enough squid for the ocean, too.”

Foote and Hanlon said the sonar techniques could be adapted and applied to more effectively manage other squid fisheries around the world, including major fisheries in South Africa, Japan, the Falkland Islands, and perhaps on the United States East Coast.