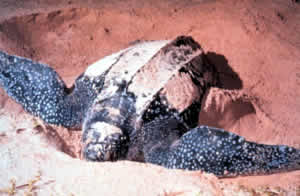 A newly discovered migration route may be good news for the leatherback turtle. credit NOAA

PALO ALTO, California -- With a name like "Leatherback Turtle" you might think the sea turtles could stand up to just about anything the ocean can throw at them, and for more than a hundred million years, they have. But tough, long-lived critters though they are, the population of leatherbacks in the eastern Pacific Ocean has plummeted by over 90 percent in the last 20 years.

Like many species that migrate across a vast ocean, pinpointing all the possible causes of their decline is difficult and figuring out where conservationists might be able to intervene on their behalf is hugely challenging. But a major effort to tag and track leatherbacks that nest on the Pacific coast of Costa Rica has yielded unprecedented insight into their behavior. While most sea turtles, including other populations of leatherbacks, have widely varied dispersal patterns as they fan out across the ocean from the beaches where they nest, the leatherbacks from the beaches at Playa Grande have been found to consistently follow a relatively narrow corridor out into the sea, past the Galapagos Islands and across the equator to an area in the South Pacific where they linger at length. This discovery could be the key to the leatherbacks' salvation.

"Given that the turtles seem to move in a predictable way from the nesting beach through the equatorial region from roughly February through April, we could potentially suspend fishing in certain areas while the leatherbacks are passing through that part of the eastern Pacific," said George Shillinger, doctoral candidate in biology at Stanford University's Hopkins Marine Station.

By taking the new data correlating turtle movements with various environmental features along their route and comparing that with the timing of fishing activity in the different areas the turtles travel through, the researchers can pinpoint the times and places where turtles are at the highest risk-thus providing new opportunities for improved management of the leatherback population.

Shillinger is the first author of a paper published in the July 15 issue of Public Library of Science Biology and part of a large team of biologists and physical and biological oceanographers from the United States, France and Costa Rica who worked on the multiyear study.

The leatherback tagging study is part of the Tagging of Pacific Predators (TOPP) program, which has tagged other animals including the white shark, bluefin tuna, black-footed albatross and elephant seal. TOPP is part of the Census of Marine Life, a global network of researchers in more than 80 nations engaged in a 10-year scientific initiative to assess and explain the diversity, distribution and abundance of life in the oceans.

Over three field seasons, from 2004 to 2007, Shillinger, co-author Bryan Wallace (Duke University and Conservation International) and a team from Playa Grande National Park outfitted 46 females on the beach with small tags that emitted signals that were picked up by satellites, enabling the team to track the turtles' location.

Shillinger and his colleagues worked with research oceanographers and co-authors Steve Bograd and Helen Bailey at the National Oceanic and Atmospheric Administration and Daniel Palacios, also at NOAA but from the University of Hawaii. They examined turtle speeds and movements in relation to the distribution and strength of the equatorial current system and found that the turtles increased their speeds as they moved through high-energy areas.

But how much of the turtles' trajectory was from being pushed around by the currents and how much was the result of their own free will, they couldn't tell until French oceanographer and co-author Philippe Gaspar analyzed the data using a method he had developed to make that distinction. Once the effect of the currents had been factored out, the turtles were found to be consistently heading in a south-southwesterly direction.

Year after year, the track was remaining the same. Not only were the turtles heading in the same direction, they were actually trying to follow an even narrower path than the raw data showed. As Bograd put it, "They definitely had a place they wanted to go."

That place is the South Pacific Gyre, a vast region considered a relative desert among the world's oceans. So why go there if it's so barren?

"That's still a big puzzle as to why they choose to go to this region," Palacios said.

The only data available are satellite images showing the color of the sea. Researchers interpret greener water to be richer in chlorophyll, which is considered the foundation for the ocean food chain. Thus, the relative abundance of chlorophyll is inferred to indicate the relative richness of a fishery. Satellite images show very little green in the South Pacific Gyre.

But, satellites can only penetrate about 25 meters below the surface in the gyre. "Maybe the turtles are targeting something that is deeper in the water column," Palacios said.

"What are they doing there is a big question," Shillinger said. "Perhaps the tremendous water clarity may work to the advantage of these leatherbacks because they are visual predators," he said. "They can spot little specks of white out in the deep blue sea." Leatherbacks dine exclusively on gelatinous zooplankton, such as jellyfish.

Shillinger also said that there is a substantial longline fishery in that area, for bigeye and yellowfin tuna. "Obviously, the fish are eating something and it's something we're not picking up in chlorophyll signatures from satellite imagery," he said.

Given that leatherbacks have been recorded diving as deeply as 1,280 meters, they have ample choice as far as where in the water column they choose to feed. And considering that they can grow to over 6 feet in length and weigh up to 2,000 pounds, it seems like a safe bet that they're feeding on something.

The presence of the longline fishery in the South Pacific Gyre may be one of the reasons for the steep decline of the leatherbacks, according to Shillinger. Longliners going after fish such as tuna sometimes hook turtles. This unintentional bycatch can take a heavy toll on a species.

"What often happens with longliners is that it is just inconvenient to hassle with a turtle and they don't want to lose the hook, either, so what people will do is just cut the flipper off with a machete and just send the turtle away to die," he said. "A turtle without a front flipper is a dead turtle."

Shillinger said there may also be another reason for the leatherbacks' population crash, one not so obvious from their data.

There was one turtle that didn't follow the migration route to the South Pacific Gyre. Instead, it swam south along the coast of Central America, where it stayed for the entire time the tag was working, 588 days.

"It seems logical that turtles would want to move along the coast, because these are highly productive regions, where they don't have to work as hard to find food," Shillinger said. Even though only one of the 46 subjects of the study cruised the coastal areas, he said it might be a rare survivor of a larger population that used to swim in the coastal area, but could have been hit hard by human fishing pressure in the near shore areas. Gillnets and longlines are major threats to turtles in these areas.

Shillinger says they won't be able to answer that question until they have gathered more data, since very little current data exists about bycatch in these coastal fisheries. As the tags are designed to degrade and fall off, the researchers haven't been able to capture the turtles' movements beyond about two years. He suggests that turtles returning to Costa Rica from the South Pacific Gyre may turn out to be using the near shore habitats on their return.

Some progress in helping the leatherback population on the beaches of Playa Grande has already been made. Local villagers used to harvest the turtle eggs quite heavily, but owing to efforts on the part of pioneering leatherback researcher and coauthor Jim Spotila (Drexel University), the Leatherback Trust, and staff and volunteers from the Costa Rican Ministry of Environment and Energy, that practice has been halted locally. People who once collected eggs are now paid to protect them and tourists have been coming to see the turtles. "Turtle tourism has emerged as an alternative economy and now there is a real focus on protecting this beach," Shillinger said.

But, noting that there is still intense pressure to develop Playa Grande and that some illegal development is ongoing, Shillinger added, "This beach is more or less the last stand for nesting leatherbacks in the eastern Pacific, so if this beach goes, it's going to be a real blow."

Shillinger and his colleagues are cautiously optimistic about the impact their new data about the migration routes could have on bolstering the leatherbacks' survival rate.

"Being able to see these migratory corridors is something we only dreamed of when we started the project," said co-author Barbara Block, the Charles and Elizabeth Prothro Professor in Marine Sciences at Hopkins Marine Station. Block is one of the researchers on the TOPP team and is Shillinger's doctoral adviser.

The level of detail the researchers obtained about when the turtles are in a particular area along their route means it could be possible to have a major impact on reducing turtles lost at sea to bycatch just by temporary closures of certain areas. Temporary closures are likely to be much more palatable than long-term ones to the various nations and regulatory agencies that would have to agree on any closures for them to be effective.

"It is still at the early stage globally, putting together large transboundary, transnational plans for protecting highly migratory species like turtles," Shillinger said. "First and foremost, you need political will and a framework in which to operate." International conventions have produced agreements on the need to protect many endangered ocean species, and Shillinger said that as constituents become aware of the situation and lobby their politicians, governments slowly begin to take action. But the critical part is having solid science to serve as a basis for developing any agreements.

In his efforts to bring the plight of the leatherback populations in the Pacific Ocean to people's attention, Shillinger teamed up with Stanford MBA graduate Mark Breier to create and launch the Great Turtle Race, largely facilitated by TOPP and coordinated by the Leatherback Trust. In this educational project, a race among leatherback turtles across the Pacific Ocean is simulated using real data from the tagging project. This year's race, the second annual, ended in June and for the first time included data from leatherbacks that started from Indonesia, in addition to those starting from the Americas.

"I wouldn't write these turtles off. If we can inform and change fisheries practices with sound science and policy, then hopefully there will be a chance to conserve turtles and the ecosystems that they occupy," Shillinger said. "These turtles could be a really awesome flagship for conservation."