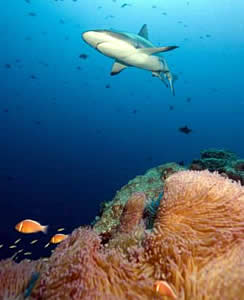 A new study has shown that a single reef shark can contribute almost US$2 million in its lifetime to the economy of Palau. Credit Pew

WASHINGTON, D.C. -- A single reef shark can contribute almost US$2 million in its lifetime to the economy of Palau, according to a new study by the Australian Institute of Marine Science (AIMS) and the University of Western Australia. The analysis quantified the economic benefits of the shark-diving industry to the Pacific island nation and found that its value far exceeded that of shark fishing.

"Sharks can literally be a 'million-dollar' species and a significant economic driver," said Mark Meekan, principal research scientist at AIMS. "Because of their low rates of reproduction and late maturity, shark populations have been driven into a global decline due to fishing. Yet our study shows that these animals can contribute far more as a tourism resource than as a catch target."

Findings from the study, which looked at the reef sharks observed at Palau's major dive sites, include:

Globally, up to 73 million sharks are killed every year primarily for their fins, which are used in the Asian delicacy shark fin soup. The Pacific Island States have been among the first to recognize the danger of this unsustainable rate of consumption. In 2009, Palau President Johnson Toribiong declared Palauan waters to be a shark sanctuary in his address to the United Nations General Assembly. Since then, the U.S. state of Hawaii, the territories of Guam and the Northern Marianas, and the Republic of the Marshall Islands all banned the possession, sale or distribution of shark fins.

"Shark tourism can be a viable economic engine," said Matt Rand, director of Global Shark Conservation for the Pew Environment Group, which commissioned the research. "Overfishing of sharks can have disastrous effects on ocean ecosystems, but this study provides a compelling case that can convince more countries to embrace these animals for their benefit to the ocean and their value to a country's financial well-being."