Study: Recovery Of Fish Populations From Overfishing Can Take Decades; 'Up To 37 Years' 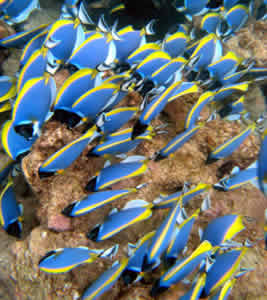 Recovery of fish populations from overfishing can take decades, reports a new study based on 37 years of observations.

Writing in the journal Ecological Applications, scientists led by Wildlife Conservation Society (WCS) biologist Dr. Tim McClanahan found that when protected by "no-take" zones, commercially important species such as parrotfish, wrasses, and surgeonfish can take more than twenty years to recover fully from over exploitation. The results show that while recovery is possible, overfished reef systems require long periods of protection to become healthy again.

“There’s a pressing need for long-term studies on how fish communities in reef ecosystems rebuild when fishing is banned,” said McClanahan. “This study gives us some important insights in how the different fish species recover and how these communities affect the health of the reef as a whole.”

McClanahan and colleagues measured recovery rates of eight dominant fish families in four national marine parks off the coast of Kenya between 1987 and 2005. They found that species diversity peaked and stabilized ten years after a marine park was closed to fishing, but that the recovery rates for different families and species was variable, partly as a result of competition for resources among different species.

"Fished coral reef ecosystems take a considerable time to recover the full diversity, biomass, and ecological states and processes after the cessation of heavy fishing, particularly where heavy fishing continues around the borders of closures," wrote the authors. "This finding suggests that permanent closures (>37 yr) are required to maintain ecological states that are representative of unfished ecosystems and for management programs that wish to maintain representative reefs. Periodic and small closures, which are likely to gain more support from local level management, have limits to preserving fishery-sensitive species and ecological processes."

“Decisions made by managers to close areas to fishing in an effort to save fish populations can be unpopular but necessary,” added McClanahan. “What this study has shown us is that many fish populations take long periods of time to recover fully, and that permanent bans on fishing in some parks are necessary if we're to conserve healthy coral reef systems.”