Research: Acidification Of The Sea Hampers Reproduction Of Marine Species; 'A 25 Percent Drop In Fertility' 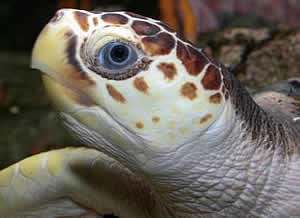 DURHAM, North Carolina -- The number of sea turtles accidentally caught and killed in fishing gear in United States coastal waters has declined by an estimated 90 percent since 1990, according to a new study by researchers at Duke University Project GloBAL and Conservation International.

The report, published in the scientific journal Biological Conservation, credits the dramatic drop to measures that have been put into place over the last 20 years to reduce bycatch in many fisheries, as well as to overall declines in U.S. fishing activity.

Before measures to reduce bycatch were put in place, total sea turtle takes surpassed 300,000 annually. Of these, 70,000 turtles were killed.

The study used data collected from 1990 to 2007 by the National Marine Fisheries Service (NMFS) to determine bycatch rates across more than 20 fisheries operating in Atlantic waters from the Gulf of Mexico to the Canadian border, and in the Pacific Ocean, along the West coast and around Hawaii.

It found that overall turtle bycatch rates, including both fatal and nonfatal run-ins, have fallen about 60 percent since 1990.

Shrimp trawls in the Gulf of Mexico and southeastern U.S. accounted for up to 98 percent of all by-catch takes and deaths during the study period.

All six marine turtle species that occur in U.S. waters are categorized as threatened or endangered on the U.S. Endangered Species List. They are loggerheads, leatherbacks, hawksbills, olive ridleys, Kemp's ridleys and green sea turtles.

Bycatch is an acute threat to sea turtle populations worldwide. High bycatch rates can be indicative of unsustainable fishing practices that negatively impact the health of marine ecosystems.

"The reduction of bycatch and mortality shows important progress by NMFS, which serves as a model for reducing sea turtle bycatch in other parts of the world," says Elena Finkbeiner, a PhD student at Duke and lead author of the paper. "Our findings show that there are effective tools available for policymakers and fishing industries to reduce sea turtle bycatch, as long as they are implemented properly and consistently."

Among the mitigation strategies that have helped reduce bycatch are: the use of circle hooks and dehooking equipment in longline fisheries, to reduce the severity of turtle injuries; the use of turtle excluder devices (TEDs) in shrimp trawl nets to allow captured sea turtles to escape; and the implementation of time-area closures to restrict fishing activities at times and places turtles are most likely to be present in the highest numbers.

Piecemeal regulation remains a problem, the study notes. Sea turtles are currently managed on a fishery-by-fishery basis, which means that bycatch limits are set for each fishery without accounting for the overall population impacts of all the takes added together. This fragmented approach leads to total allowed takes that exceed what sea turtle populations can sustain.

"Bycatch limits must be set unilaterally across all U.S. fisheries with overall impacts to populations in mind, much as it's done for marine mammals," says co-author Bryan Wallace, director of science for Conservation International's Marine Flagship Species Program and adjunct faculty member at Duke's Nicholas School of the Environment.

The researchers note that actual bycatch rates are likely higher than what the study reports because in many fisheries, particularly the shrimp trawl fishery, the number of on-board observers who document bycatch on fishing vessels is low relative to the sheer volume of fishing that is occurring.

"This paper provides a baseline to examine what is working and what can be improved in preventing sea turtle bycatch," Finkbeiner says. "It (makes) a strong case for the need for increased observer coverage and bycatch reporting."