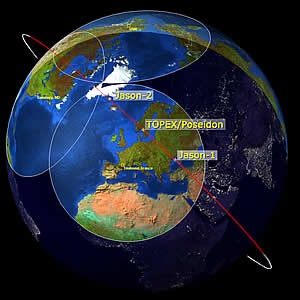 When the two ocean-observing satellites OSTM/Jason-2 and Jason-1 begin their tandem mission in February, they'll be flying in a new configuration designed to get the most detailed measurements possible of the ocean surface. They'll enable scientists to distinguish much smaller ocean features than they could with only one satellite and see more quickly how these features change over time.

"The goal is to map global ocean currents--their locations and their speed," says JPL's Lee-Lueng Fu, project scientist for OSTM/Jason-2 and Jason-1. This information will enhance operational applications, such as ship routing or tracking pollution in the ocean, he says, as well as research efforts. "Currents and eddies contain most of the kinetic energy in the ocean. They transport heat, nutrients and carbon dioxide--critical elements of our climate system."

The maneuvers to put the two satellites in place for this new mission began on January 26 and will continue for about 10 days.

This will be Jason-1's second tandem mission. Launched in 2001, Jason-1 took the place of the aging Topex/Poseidon, continuing the sea surface height measurements begun by Topex/Poseidon in 1992. After the two satellites were calibrated and their data compared to make sure that their measurements were exactly the same, Topex/Poseidon was gently nudged just far enough ahead of Jason-1 to put its ground tracks midway between those of Jason-1. The two spacecrafts collected data simultaneously during this "interleaved" tandem mission for three years until Topex/Poseidon ceased operation in January 2006.

Jason-1 has now been replaced by the Ocean Surface Topography Mission/Jason-2 satellite, launched in June 2008. As before, the newer satellite moved into orbit close to its predecessor soon after launch and the spacecraft were calibrated. OSTM/Jason-2's data were validated to ensure that it adds seamlessly to the 16-year-long continuous record of sea surface height measurements.

Now it's time for Jason-1 to step aside. For this new interleaved tandem mission, scientists are taking advantage of Jason-1's still healthy propulsion system to put it into a much different position than Topex/Poseidon was in the previous mission. Topex/Poseidon remained so close to Jason-1 that the two spacecraft were flying almost simultaneously over the same region. When maneuvers are complete for this new tandem mission, Jason-1 will be in the same orbit as OSTM/Jason-2 but much further away, about five days behind on the other side of Earth. Its ground tracks will fall mid-way between those of OSTM/Jason-2.

It takes 10 days for the satellites to cover the globe and return to any one place over the ocean. So, in this new tandem configuration, Jason-1 will fly over the same region of the ocean that OSTM/Jason-2 flew over five days earlier. Working together, the two spacecraft will measure the surface topography of the ocean twice as often as would be possible with one satellite. "Over a 10-day period, the two satellites will provide the detailed measurements needed to map small, rapidly changing currents and eddies," says Fu.

Getting to this new operational orbit will take some precise maneuvering. "The first thing we'll do is a planned burn using the spacecraft's four thrusters to bring the spacecraft down 10 kilometers," says Glenn Shirtliffe, JPL Jason-1 project manager. "Then we'll evaluate the burn--check to see how close we've come to our target--and we'll bring it down 10 more kilometers for a total of 20 altogether."

At this lower altitude, the spacecraft's route around the Earth is shorter and it will make the trip faster. "Once it reaches its position on the opposite side of Earth from OSTM/Jason-2," Shirtliffe continues, "it will make the same trip back up to put at the same altitude as OSTM/Jason-2, 1336 kilometers (830 miles).

"We will be testing with precise orbit determination systems to be sure it is exactly where it should be," he says. "Our sea surface height measurement depends on precise location. Once we've boosted up to our operational orbit we'll turn on the altimeter, check the other instruments, and verify that we're flying the way we predicted." Mission partner CNES designed the maneuver, and JPL is performing the uplink to the spacecraft.

"We've tried to plan this mission to get optimal results," says Fu. "In the past we once had four altimeters making measurements of the sea surface, now we have only the two Jason's. That makes these measurements even more important than before."