Scientists Studying Britain's Last 'Resident' Orca Pod; 'No Youngsters Have Been Seen For Such A Long Time'

New 'Revolutionary' Underwater Breathing Device Revealed; 'The Greatest Thing In the Industry In a Long Time' 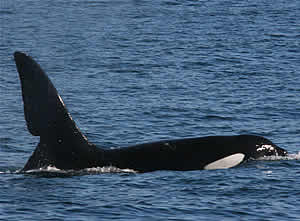 Scientists are studying the small population of killer whales that inhabit the waters off the west coast of Scotland. credit N. Van Geel

ISLE OF MULL, Scotland -- The Hebridean Whale and Dolphin Trust (HWDT) and PhD student Andy Foote have together been studying the small population of killer whales that inhabit the waters off the west coast of Scotland.

The ‘west coast community’, as they are known in the field, is only thought to consist of nine animals. Using a technique called photo- identification (photo-ID), each animal in the group can be recognised by the unique markings on their dorsal fins. The photo-ID studies have also revealed that of the nine individuals, there are four males and five females. All the animals associate with each other although some individuals are more regularly sighted together than others. The conservation status of the group is thought to be critical since no live calves have been sighted since research began almost two decades ago.

Photo-ID has also helped HWDT better understand the wide-ranging nature of these apex predators. Although dubbed the ‘west coast community’, in the past two months sightings off Ireland have been reported, on one occasion all nine individuals were present off the Cork coast. An extremely distinctive male ‘John Coe’ was also sighted off the Pembrokeshire coast in 2008 and 2007. However, Andy Foote’s research into orca populations of the north east Atlantic has shown that there is no association between the Hebridean orca and the groups found around the rest of Scotland’s coast, mainly off the coasts of Orkney and Shetland. Moreover, recent findings have revealed that the populations are also morphologically different, suggesting separate ancestry. Genetic analysis indicates the two types belong to two different populations. "Type 1 specimens (groups found in the Northern regions) were from closely related lineages, but the type 2 whales (the west coast community) were more closely related to a group of Antarctic killer whales," Dr. Foote explains.

Unlike the other orca populations in the north Atlantic, who feed primarily on pelagic fish and seals, HWDT still have little evidence of what the west coast group are feeding on, although it is likely that they are feeding on other cetaceans, such as harbour porpoises and possibly minke whales. Differentiation in tooth wear from stranded orca has allowed Foote to highlight this difference in diet and ecological niche; the west coast community have virtually no tooth wear while in the other groups adults have worn their teeth down quite substantially.

There is still much to learn about the Hebridean orca. Only with continued study can we better understand the only ‘resident’ population found in British waters. HWDT Chairman Maxwell MacLeod said “I find it really alarming that no youngsters have been seen for such a long time. It is vital that we maintain this research as we know so little about the role these animals play in our eco-system, and we need the support of the public to do this”. Every year HWDT welcomes volunteers onboard their research yacht Silurian to assist with data collection from onboard. These cetacean research surveys, alongside reports from the public and other organisations, have allowed for more information on Scotland’s cetaceans to become apparent. If you would like to join HWDT onboard, support our work or would like to report a sighting please visit www.hwdt.org.