Report: Amorous Toads Kill Scores of Carp at Brit Lake; 'This is Unnatural'

Scientists: Carp Found to Hold Its Breath for Months 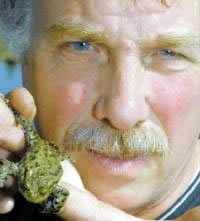 Lake manager Mike Heelis with one of the protected toads

SCARBOROUGH, U.K. -- Amorous toads have caused the deaths of scores of fish at a lake near Scarborough. In one incident around 70 carp, worth about Â£3,000, were lost after male toads tried to mate with them on the Wykeham Estate.

The toads clamp themselves on to the carp’s face and push its eyes into the sockets – and, if several reptiles are involved, the carp drowns due to its gills being closed.

Mr Heelis said the fish had encountered the toads after swimming into the lake’s warmer, shallow waters during the recent mild weather.

He said: “The fish are stressed, you can tell, because they are lethargic. We have several thousand fish here and maybe a third of them had the toads attached to them. This is unnatural.”

The former Royal Marine said the Environment Agency had visited the site but had said the toads could not be moved to another location because they were a protected species.

He said: “This is my livelihood and the fish deserve some sort of protection. The anglers are losing out as well. It’s just frustrating that we have just got to sit there and watch it happen.”

An Environment Agency spokeswoman said: “The toads are a protected species and this is a natural phenomenon. We gave advice to the owner but this is part and parcel of us living with nature.”

Stuart Burgess, a spokesman for Natural England, an organisation formed from several agencies including English Nature, said the phenomenon was natural and the toads would soon stop their amorous activities.

He said: “It’s natural behaviour. They usually let go once they realise it’s not another toad. It’s surprising it’s affecting that number of fish. It is short-lived and the toads will stop very soon.”