Study Documents First Cookiecutter Shark Attack On A Live Human; 'Kind Of Like Using A Melon-Baller' 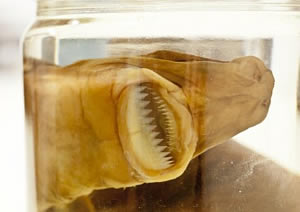 specimen of a cookiecutter shark, Isistius brasiliensis, is housed in the Florida Museum of Natural History collections. credit Kristen Grace, 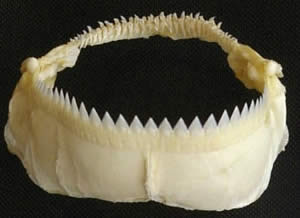 Unlike other sharks, a cookiecutterâs teeth are connected at the bottom in the lower jaw. credit Randy Honebrink/ Hawaii Division of Aquatic Resource 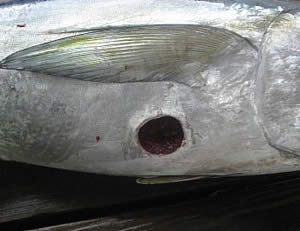 A bite from a cookiecutter shark is seen on this tuna recovered in the Bahamas in this photo from April 29, 2008. credit John Soward

GAINSVILLE, Florida -- A new study co-authored by University of Florida researchers provides details on the first cookiecutter shark attack on a live human, a concern as warm summer waters attract more people to the ocean.

The study currently online and appearing in the July print edition of Pacific Science warns that swimmers entering the cookiecutter's range of open ocean tropical waters may be considered prey. The sharks feed near the surface at night, meaning daytime swimmers are less likely to encounter them. The species is small, with adults reaching about 2 feet, but their unique jaws specialize in scooping out a piece of flesh, leaving victims with a crater-like wound.

"Not only is it painful, but it presents a difficult circumstance for recovery in the sense that there has to be plastic surgery to close the wound and you have permanent tissue loss," said co-author George Burgess, director of the International Shark Attack File housed at the Florida Museum of Natural History on the UF campus. "It's not as scary as 'Jaws,' but it's very different from any other kind of attack we have in the International Shark Attack File because of the size of the shark and the modus operandi."

The March 16, 2009, incident involved a cookiecutter shark, Isistius brasiliensis, repeatedly attacking a long-distance swimmer attempting to cross the Alenuihaha Channel from Hawaii to Maui. After sunset, the victim said the first bite on his chest felt "like a pin prick." He then was bitten on the left calf while climbing into the rescue kayak following him during the swim. The International Shark Attack File lists two other incidents involving cookiecutters, both judged to be inflicted post-mortem. Dubbed "demon whale biters" by biologist Stewart Springer, a shark expert who studied the fish for more than 60 years before his death in 1991, cookiecutters inhabit deep tropical waters and their bites have been found on many deep-sea animals, including tuna, whales, dolphins and swordfish.

Unlike other sharks, a cookiecutter's teeth are connected at the bottom in the lower jaw. When feeding, the shark bites its victim and then rotates to remove a plug of flesh, "kind of like using a melon-baller," Burgess said.

"They have the biggest teeth of any shark in relation to the size of their jaws," he said. "They look like the cartoon sharks you see with oversized teeth."

The victim also reported seeing squid before the attack. Like squid, cookiecutters are bioluminescent, producing their own light on parts of their bodies. Researchers believe the sharks may use this specialization to hide among squid while larger fish, such as tuna, prey on the squid. The sharks then surprise the larger fish, taking bites before quickly leaving the scene.

A type of dogfish shark, cookiecutters do not kill their fish victims and the wounds they inflict may be useful as biological markers, Burgess said. Because they are known to only dwell in tropical waters, scientists can use the bites to better understand the movement patterns of their victims.

"When we see a killer whale in Alaska with the mark, it tells us the whale traveled there from the tropics," Burgess said. "We can also judge how long ago it happened by how much the wound has healed."

John O'Sullivan, curator of field operations and a senior collector at the Monterey Bay Aquarium in California, said he is fascinated by the sharks' interesting behavior. Researchers know little about the animal and O'Sullivan's attempts to collect a live specimen for the aquarium over the past few years are "turning out to be more difficult than our white shark program," he said. Because of the sharks' small size, swimmers may be able to protect themselves by wearing a thick wetsuit, he said.

"We have to be careful because of how different species occupy a niche â how that varies is not at all understood," O'Sullivan said. "These animals are very small and very aggressive in behavior. People say, 'Thank God these things don't get big.' "

The study was led by Randy Honebrink of the Hawaii Division of Aquatic Resources and co-authors include Robert Buch of the Florida Program for Shark Research at the Florida Museum and National Oceanic and Atmospheric Administration Fisheries Service, and physician Peter Galpin of Maui Memorial Hospital.