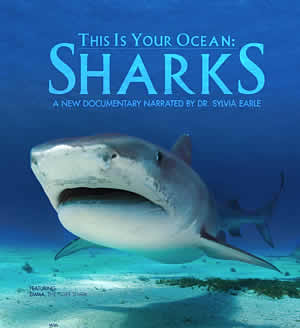 This Is Your Ocean: Sharks makes its South Florida debut this week.

FORT LAUDERDALE, Florida -- Nova Southeastern University's (NSU) Oceanographic Center in conjunction with the Guy Harvey Ocean Foundation, presents the Fort Lauderdale premiere of This is Your Ocean: Sharks at The Museum of Art |Fort Lauderdale on Wednesday, Oct. 19 at 6 p.m.

A public showing will be held the following night at Nova Southeastern University's Miniaci Theatre on Thursday, Oct. 20, at 6:30pm. All proceeds will benefit the Guy Harvey Research Institute at NSU's Oceanographic Center.

"The ban on commercial shark fishing and exportation of shark by-products is a huge step in the conservation of sharks worldwide," says Guy Harvey, the Cayman Island-based marine artist and conservationist. "Healthy oceans are essential for life on our planet. It is our collective responsibility to conserve the marine environment and maintain the biodiversity of our oceans."

This documentary reveals up close the misconceptions and myths surrounding these misunderstood predators of the sea and promotes global shark conservation. Millions of sharks are killed each year in the illegal shark-fin trade to satisfy the global appetite for shark-fin soup.

The film features Harvey, who is one of the world's leading marine conservationists. He is joined by Jim Abernethy, a shark expert and diver and the film's executive producer, George Schellenger for a question and answer session following the film.

This is Your Ocean: Sharks is a prologue to the Museum of Art|Fort LauderdaleÂ¹s exhibition SHARK!, a multimedia spectacular beginning on May 13, 2012 that will focus on the ocean's top predators as illustrated by marine artists Guy Harvey, John Singleton Copley, Damien Hirst, and many other artists.

Read more about This is Your Ocean: Sharks at http://www.thisisyourocean.com/thefilm.html.