Research: 'Four-Eyed' Fish Sees Above And Below Water; 'Gene Duplication Can Lead To Innovation'

Research: How Fish Mend a Broken Heart May Lead to Human Cures 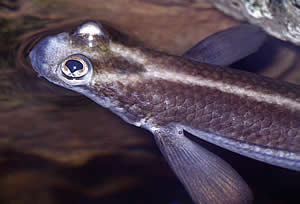 VANCOUVER, Canada -- A "four-eyed" fish that sees simultaneously above and below the water line has offered up a dramatic example of how gene expression allows organisms to adapt to their environment.

Gregory L. Owens, a University of British Columbia graduate student, found a sharp divide between the upper and lower sections of the eyes of Anableps anableps, a six- to 12-inch fish closely related to guppies. The findings were published today online in Biology Letters.

The four-eyed fish spends most of its life at the water surface, feeding on flying insects as well as algae, in the mangrove swamps of central America and northern South America. The upper half of its eyes penetrate the water line, while the lower half of its eyes are submerged.

Its opsin genes, which code for light receptors in the eye, closely resemble those of other fish species that don't see above water, so it was unknown if the four-eyed fish's eyes were adapted to both aerial and aquatic light.

Owens, while conducting research for a master's degree at the University of Victoria, sought an answer in how the opsin genes were expressed. He made several molecular probes that, when applied to the retina, would bind to specific opsin gene messenger RNA (mRNA), the molecules that translate DNA into protein synthesis.

By determining the type and distribution of mRNA in the retina, Owens discovered that the eye was clearly divided in sensitivity. One part of the retina, exposed to aerial light, has cones (neurons that convert light into brain signals) that are sensitive to the green wavelengths that predominate in the air. The other part of the retina, exposed to aquatic light, has cones more attuned to the yellow wavelengths of muddy water. The whole eye, meanwhile, is sensitive to other wavelengths, from ultraviolet to blue.

"We expected some difference between different parts of the eye, but not as dramatic as this," says Owens, who is now earning his PhD in UBC's Department of Botany.

John Taylor, an associate professor of biology at the University of Victoria who supervised Owens' work, said the study is part of a larger fish opsin research program that examines gene duplication. Usually, duplicated genes are rendered non-functional by mutations â but not in this case.

"Greg's study illuminates how gene duplication can lead to innovation â in this case each half of the eye gets its own duplicate, tailored to its particular needs," Taylor says.

The research was supported by the Natural Sciences and Engineering Research Council of Canada.