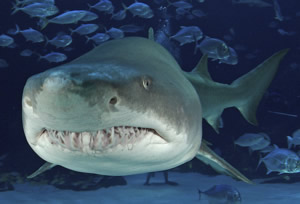 The sharks were introduced into the 6.3 million gallon habitat alongside the whale sharks, manta ray and many other species. The new sharks range from five to more than eight feet in length and weigh between 56 and 237 pounds.

"In keeping with the spirit of our New Every Ninety Program, we are very excited to introduce the new sand tiger sharks at Georgia Aquarium," said Gregory Bossart, Senior Vice President and Chief Veterinary Officer at Georgia Aquarium. "Through teaching guests about these scary-looking, yet docile species, the Aquarium will create awareness about their declining numbers."

The sand tiger shark (Carcharias taurus) is listed as "vulnerable" on the IUCN Red List. The sand tiger shark is caught for human consumption, as well as for fishmeal and liver oil, and the fins are used for leather production. The species has the lowest reproductive rate among sharks, giving birth every two years to one or two pups after a gestation period of 9 to 12 months.