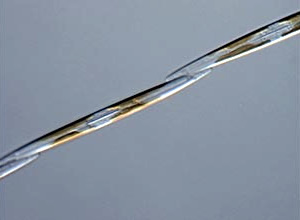 Microscopic algae such as this Pseudo-nitzschia may be responsible for harmful algal blooms. Credit: Virginia Armbrust et al., UW

ARLINGTON, Virginia -- A part of the Strait of Juan de Fuca, which separates Washington state from Canada's British Columbia, is a potential "hot spot" for toxic harmful algal blooms affecting the Washington and British Columbia coasts.

Marine scientists found that under certain conditions, toxic algal cells from an offshore "initiation site" break off and are transported to nearshore areas, where they may trigger harmful algal blooms that ultimately force the closure of Washington state shellfish beds along beaches.

"Knowing more about these blooms is critical for protecting human and ecosystem health," said David Garrison, director of the National Science Foundation (NSF)'s Biological Oceanography Program, which co-funded the research. "This research is a very successful step toward addressing harmful algal blooms in the U.S."

The study, conducted by a team of scientists from NOAA's Fisheries Service, San Francisco State University and the universities of Washington, Maine and Western Ontario, is part of the interagency Ecology and Oceanography of Harmful Algal Blooms Pacific Northwest Program.

"Understanding how and where harmful algal blooms originate will help provide early warnings to protect human health and reduce the impact of biotoxins on coastal shellfisheries," said Vera Trainer, lead author of a paper published in the January issue of the journal Limnology & Oceanography, and a scientist at the NOAA Fisheries Northwest Fisheries Science Center in Seattle.

Scientists noted that the Juan de Fuca eddy, a circular water mass rotating some 30 miles off the northern coast of Washington at the mouth of the Juan de Fuca Strait, frequently contained significant populations of the microscopic toxic alga, Pseudo-nitzschia.

Over the course of the five-year study, the researchers took thousands of measurements at sea and conducted experiments onboard research vessels and in their laboratories. They hoped to better understand the factors that initiate and sustain the growth of this toxic alga, and to determine why it produces a deadly biotoxin.

This naturally-produced biotoxin, domoic acid, can accumulate in shellfish, crabs and some fish.

By attacking the nervous system it can cause adverse health effects or death in birds, marine mammals and humans who consume affected marine species. Fishing communities may suffer severe economic losses as a result of closures of recreational, subsistence and commercial harvesting, and lost tourism.