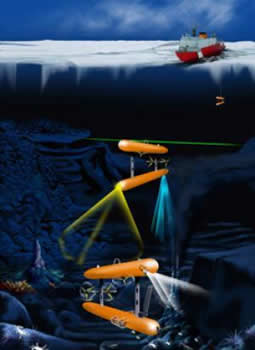 WOODS HOLE, Massachusetts -- Scientists and engineers from the Woods Hole Oceanographic Institution (WHOI) have just completed a successful test of new robotic vehicles designed for use beneath the ice of the Arctic Ocean. The multidisciplinary research team will now use those vehicles to conduct the first search for life on the seafloor of the world’s most isolated ocean.

Researchers will use two new autonomous underwater vehicles (AUVs)--Puma and Jaguar--in tandem to locate hydrothermal vent sites on the seafloor of the Arctic Ocean. (Credit: Illustration by E. Paul Oberlander, Woods Hole Oceanographic Institution) WHOI researchers have built two new autonomous underwater vehicles (AUVs) and a new tethered, remote controlled sampling system specifically for the difficult challenges of operations in the Arctic ice. They hope to discover exotic seafloor life and submarine hot springs in a region of the ocean that has been mostly cut off from other ecosystems for at least 26 million years.

The 30-member research team will depart on July 1 from Longyearbyen, Svalbard, for a rare expedition to study the Gakkel Ridge, the extension of the mid-ocean ridge system which separates the North American tectonic plate from the Eurasian plate beneath the Arctic Ocean.

The research team for the Arctic Gakkel Vents Expedition (AGAVE) includes specialists in each field of deep-sea exploration, with scientists and engineers from the United States, Norway, Germany, Japan, and Sweden.

WHOI geophysicist Robert Reves-Sohn will serve as chief scientist. Fellow principal investigators include: Tim Shank, a hydrothermal vent biologist from WHOI; Hanumant Singh, a WHOI engineer and vehicle developer; marine chemist Henrietta Edmonds of the University of Texas at Austin, who sailed on the last research expedition to the Gakkel Ridge in 2001; Susan Humphris, a WHOI geochemist who has surveyed dozens of hydrothermal vent sites around the world; and Peter Winsor, a WHOI oceanographer who studies Arctic Ocean circulation and its implications for climate.

“This is an exciting opportunity to explore and study a portion of Earth’s surface that has been largely inaccessible to science,” said Reves-Sohn. “Any biological habitats at hydrothermal vent fields along the Gakkel Ridge have likely evolved in isolation for tens of millions of years. We may have the opportunity to lay eyes on completely new life forms that have been living in the abyss beneath the Arctic ice pack.”

Most of the instrumentation that researchers would normally use to study deep sea environments and organisms—such as the human occupied submersible Alvin or tethered vehicles—cannot be safely operated in the Arctic ice, which can easily crush most small vehicles. So researchers asked Singh and colleagues to design and develop three new vehicles from scratch.

During the July expedition, researchers will use the Puma AUV, or “plume mapper,” to sniff out the chemical and temperature signals of hot, mineral-rich fluids venting out of the ocean floor. Once Puma finds the source of venting, Singh and colleagues will send down the Jaguar AUV, which will use cameras and bottom-mapping sonar systems to image the seafloor. Finally, the CAMPER towed vehicle will be lowered to the seafloor to scoop or vacuum up rocks, sediments, and living creatures.

During a 10-day engineering trial in May and June 2007, all three vehicles were lowered through the Arctic ice and driven underwater, while engineers simultaneously tested acoustic communications techniques. The researchers were able to recover their vehicles from beneath the ice, which can be risky in the midst of moving floes that can quickly close the leads around an icebreaker.

“Anyone can deploy an AUV in the Arctic; the trick is getting it back,” said Singh, who will send his vehicles to the seafloor for 10 to 24 hours at a time during the Gakkel expedition. “In order to have a good day with autonomous vehicles, the number of recoveries must equal the number of launches.”

The Gakkel Ridge extends roughly 1,800 kilometers (1,100 miles) from north of Greenland toward Siberia. It is both the deepest ocean ridge—ranging from 3 to 5 kilometers (1.8 to 3 miles) beneath the ice cap—and the slowest spreading tectonic plate boundary anywhere on Earth. The ridge moves roughly one centimeter (1/3 inch) per year, about 20 times slower than most other ridges.

At most mid-ocean ridges, Earth’s crust spreads apart, allowing hot magma from the mantle to come up and form new ocean crust. The enormous heat sparks chemical reactions between crustal rocks and the seawater that seeps down into them.

These chemical reactions produce hot, mineral-rich fluids that spew like geysers from seafloor vents, as well as massive deposits of minerals, such as copper and zinc. These hydrothermal fluids also contain chemicals that sustain rich communities of unusual life forms, which thrive via chemosynthesis, rather than photosynthesis.

Many geologists believed the Gakkel Ridge region would be too geologically cold to produce hydrothermal vents. And yet during a 2001 expedition, researchers found signs of such venting in the Arctic. Where there are vents, there may be unusual seafloor life forms.

“A few years ago, mid-ocean ridge and hydrothermal vent biologists came together and asked: ‘Where are the key places in the world to go to make big leaps in understanding biodiversity?’ The Gakkel Ridge was one of the top places,” said Shank, who plans to study the genetics of animals found during the expedition.

“The region has been mostly separated from the Atlantic and Pacific oceans for millions of years, so whatever lives there has since been evolving in relative isolation—much the way animals in Australia did," Shank added. "We know that deep-sea Arctic fauna found away from vents are more than 70 percent different from all others around the world. So at hydrothermal vents we are likely to find completely new suites of species with never-before seen adaptations.”

Some scientists—including program managers and scientists from the NASA Astrobiology Program—have been keenly interested in the possibility that Gakkel Ridge may harbor life forms and environmental conditions consistent with primordial Earth or other watery planets.

“The origin of life discussion comes up because the rocks that are exposed on this very slow spreading ridge are not volcanic, but instead come directly from Earth’s mantle,” said Humphris. “The chemistry is very much like the volcanism that occurred on the primordial Earth. If you are thinking about origins of life, you’d like to have an area that is the closest analog to what was happening on the early Earth.”

In July 2001, WHOI researchers were part of the Arctic Mid-Ocean Ridge Expedition (AMORE) that produced the first detailed maps of the Gakkel Ridge and made the unexpected discovery that the ridge is volcanically active. Scientists also found that large sections of Earth’s mantle appear to be deposited directly onto the seafloor along the Gakkel Ridge.

The Gakkel Ridge expedition will be covered live on the web, allowing students, educators, and the general public to follow along with daily dispatches from the Arctic Ocean. The Dive and Discover web site brings students and teachers along on research field trips to read about science in action, while the Polar Discovery project uses photos and live phone calls from the Oden to allow museum visitors and the public to see the Arctic through the eyes of the explorers.

Major funding for the expedition and for vehicle development was provided by the National Science Foundation (NSF) and the National Aeronautics and Space Administration (NASA). Support for the Gakkel Ridge expedition and for underwater vehicle development has been provided by the National Science Foundation’s Office of Polar Programs and Division of Ocean Sciences; the NASA Astrobiology Program; the WHOI Deep Ocean Exploration Institute; and the Gordon Center for Subsurface Sensing and Imaging Systems, an NSF Engineering Research Center.