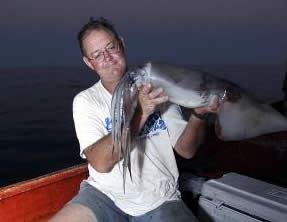 Bill Gilly, professor of biological sciences at Stanford's Hopkins Marine Station, holds a jumbo squid captured in the Gulf of California off Mexico's

STANDFORD, California -- The sperm whale and its large prey, the jumbo squid, are among the deepest divers in the ocean, routinely reaching depths of 3,000 feet or more. Now, in a new study, a team of marine scientists reports the successful tagging of sperm whales and jumbo squid swimming together off Mexico’s Pacific coast—the first time that electronic tracking devices have been applied simultaneously to deep-diving predators and prey in the same waters.

"Sperm whales (Physeter macrocephalus) and jumbo squid (Dosidicus gigas) are both major predators that spend much of their lives in one of the world’s largest ecosystems, the mesopelagic zone [650 to 3,300 feet below sea level]," the authors wrote. "How sperm whales search for, detect and capture their prey remains uncertain."

To find out, the researchers traveled to the Gulf of California, also called the Sea of Cortez—a narrow stretch of ocean that separates the Mexican mainland from the Baja Peninsula.

"The central Gulf of California is a uniquely advantageous location to study the behavioral ecology of sperm whales and their squid prey," the authors wrote. "Sperm whales are abundant year-round and appear to feed heavily on jumbo squid, a species that is easily captured and amenable to tagging. To our knowledge, this is the first attempt to simultaneously study a mesopelagic predator and its prey using electronic tagging techniques."

The jumbo (or Humboldt) squid is a large cephalopod species found only in the Pacific. A mature jumbo squid can weigh more than 100 pounds and grow more than 6 feet long. Sperm whales, the biggest of all toothed whales, inhabit every ocean. An adult male can reach nearly 60 feet in length and weigh 57 tons.

The sperm whale was immortalized by Herman Melville in his novel Moby-Dick. Heavily hunted for their oil during Melville’s time, the sperm whale population today ranges somewhere between 360,000 to 1 million. These giants have a voracious appetite for squid. According to one estimate, worldwide sperm whale predation on squid may exceed 100 million metric tons a year—roughly equivalent to the entire annual harvest of all the commercial fisheries on Earth.

Humans also are big consumers of squid, including jumbo squid, now the target of a thriving commercial fishery in Baja California. "Even though this species is found only in the eastern Pacific, it reaches from Alaska to Chile and supports the largest cephalopod fishery in the world," said Gilly, an authority on squid who is based at Stanford’s Hopkins Marine Station.

"It’s very rare to find a place like the Gulf of California where you can actually see sperm whales together with their prey," added Davis, an expert on marine mammal behavior. "I can’t think of another place in the world where this would be possible."

Despite the vital role that jumbo squid and sperm whales play in oceanic ecosystems and fisheries, many aspects of their lifestyle—including feeding and hunting—are as mysterious today as they were when Melville made the following observation in Moby-Dick: "For though other species of whales find their food above water, and may be seen by man in the act of feeding, the spermaceti whale obtains his whole food in unknown zones below the surface; and only by inference is it that any one can tell of what, precisely, that food consists."

The sperm whale remains a challenging research subject for scientists today, Davis noted. "Adult sperm whales can stay underwater for more than an hour, but nobody knows exactly what they’re doing down there," he said.

"We also know relatively little about the behavior of jumbo squid in the wild," Gilly added. "For example, it was only a couple of years ago that we discovered an area in the central Gulf of California where spawning and mating of these animals probably take place."

The MEPS study was conducted in fall 2004 near Santa Rosalia, a coastal Baja California town that is the center of Mexico’s jumbo squid fishery.

During six days at sea, the research team identified 74 individual sperm whales in a 27-square-mile area. To locate whales, researchers towed an array of hydrophones from the back of a boat and listened for the animals’ distinct clicking vocalizations. When they finally encountered a whale, the scientists carefully approached the animal and attached an electronic depth recorder to its back. Later, whenever the tagged whale surfaced for a breath of air, the device would transmit recorded data about the animal’s movements to an orbiting satellite.

Jumbo squid also were abundant, with numerous small fishing boats hauling in a total catch of about 10,000 squid per night throughout the six-day study. Captured squid were outfitted with a pop-up archival transmitting tag, which periodically sampled the animal’s depth. Unlike the instruments used on whales, the squid tags were designed to detach at a predetermined time, then float to the surface and transmit stored data to the satellite.

During the study, electronic tags were placed on five whales and three jumbo squid swimming nearby. Analysis of the tagging data showed that the whales were traveling up to 60 miles a day within a relatively small area, suggesting that they had found an abundant supply of food.

The tagged predators and prey must have crossed paths at some time during the experiment, Gilly noted. "Based on the locations of where the squid tags first appeared on the surface, all three squid had to have moved from the Santa Rosalia fishing grounds right through the area where the whales were patrolling," he said.

These results closely mirrored the diving data collected from the squid. "Tagged squid in our study occupied the 100-500 meter [300 to 1,600-foot] zone, the same region to which the whales dove over 90 percent of the time, consistent with the idea that whales were primarily preying on jumbo squid of large body size," the authors wrote. "Whales did occasionally dive beyond 500 meters, especially during daytime when the squid were deep, and we assume these also represent foraging dives."

During the day, whales and squid spent about 75 percent of the time at depths ranging from 600 to 1,300 feet, which is "consistent with the idea that the whales were foraging where the probability of encountering squid was highest," the authors wrote. At night, however, the tagged squid spent at least half of their time in shallower waters above 600 feet and the remainder at 600 to 1,300 feet. One likely explanation for this vertical movement is that the squid were following small fish and other prey that migrate toward the surface at night and then return to deeper waters during the day.

Unlike squid, however, the sperm whales did not alter their diving pattern at night. Instead, they continued to spend about three-fourths of their time at depths of 600 to 1,300 feet, according to nocturnal tagging data.

"These data show that sperm whales don’t change their feeding behavior, day or night," Davis explained. "Instead, they keep going down to about 1,300 feet, whether squid are there or not. Perhaps it’s the only way they can catch them, but no one has ever seen a sperm whale feeding in the wild, so nobody really knows how they capture their food."

The study also revealed that the squid often made rapid nighttime dives from the surface to deeper waters preferred by whales. "One reason squid may be going down there at night is because water near the surface is really warm—up to 82 F—and they may be getting stressed," Gilly explained. "The squid is using energy all of the time, because it has to swim to breathe. So when it gets into really warm water, I think it gets out pretty quickly. These deep dives, therefore, may have some kind of recovery function. We think the stress may be temperature-related, but another factor could be oxygen. It’s possible they could be negatively affected by long exposure to the higher oxygen levels found near the surface."

A stressed-out squid may be an easy target for hungry sperm whales waiting below, according to Gilly. "We propose that jumbo squid are more susceptible to predation while they are recovering at depth immediately after a deep nighttime dive," he explained.

In previous studies, Gilly found that jumbo squid are well adapted to the low-oxygen environment in deeper waters, where they spend most of their time. However, he added, at depths of 800 feet or more, where it’s very cold and oxygen levels are extremely low, the squid’s reaction time, visual acuity and swimming speed may be significantly impaired because of an inadequate supply of oxygen—a condition known as hypoxia.

"Squid need a constant supply of oxygen to support their metabolism," Davis added. "Sperm whales, on the other hand, take the oxygen down with them bound to the hemoglobin in their blood and the myoglobin in their muscles, so they don’t have to worry about hypoxia at depth."

By spending most of their time in cold, deep waters, he noted, sperm whales can take advantage of a vulnerable squid, whether it’s slowed down by hypoxia at depth during the daytime, or at night after it has made a deep dive to escape the warm, stressful conditions at the surface.

"By hunting deep in this cold, hypoxic environment at night, as well as during the day, sperm whales may favor jumbo squid that are in some way compromised and thus easier to capture," the authors wrote.

"This research provided a unique opportunity to learn more about two species that are very difficult to study in their natural habitat," Davis noted. "In the future, this co-tagging approach should yield new insights into predator-prey interactions with other pelagic species that are large enough to carry electronic tags."

Added Gilly: "Although human observers at the surface of the sea must still infer what the mysterious squid and the leviathan are doing at great depths, the use of modern electronic tagging methods will surely guide those inferences, leading to insights that even Melville might not have imagined."