Chile Bans Shark Finning; 'We Will Have A Critical Tool To Protect And Recover These Most Exploited Species' 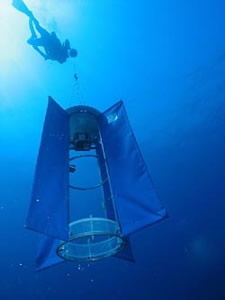 An innovative observational tool, the OWNFOR (Orientation With No Frame Of Reference) was designed by UM researchers. (Credit: Evan D'Alessandro)

MIAMI, Florida -- One of the most significant questions facing marine ecologists today, is just how much of an impact global variations in the environment are having on the dispersal of larval and juvenile marine species from open oceans to coral reefs. Previously, tracking how fish larvae migrate was done through direct observation by divers on older larvae found near the reefs, after they’d spent weeks to months in the plankton. This method did not permit divers to follow small larvae, diving larvae or larvae as they returned to the reefs at night. How tiny coral reef fish larvae locate the reef habitat across vast expanses of water has remained an enduring mystery.

An innovative research tool, designed by UM Rosenstiel School of Marine and Atmospheric Science, division of Applied Marine Physics Assistant Professor, Dr. Claire B. Paris and Senior Research Associate Cedric Guigand is making the task possible on younger larvae as they move with currents. Dubbed the OWNFOR (Orientation With No Frame Of Reference) system, this drifting observational device, which resembles a kite, allows researchers to observe marine larvae naturally influenced by factors in the open ocean. The floating chamber is designed to detect and quantify the orientation of larval coral reef fish in the pelagic environment; an often pitch black void with little or no frame of reference to navigate.

The OWNFOR system is deployed at sea and drifts while videotaping the movement of a larva placed within a clear, circular arena. It will also be possible to change their immediate environment and manipulate orientation cues, such as acoustic, chemical, or magnetic fields that larvae may use to navigate. This new system will be equipped with an infrared camera that can verify the larvae’s orientation at night.

Through a research grant from The Hermon Slade Foundation and a fellowship from the Australian Museum, she will be putting her new larval monitoring system to the test in early 2008. Paris and colleagues are interested in gathering data on the successful identification of larval abilities to orientate as they mature.

“Typical research on larvae is assessed in laboratory experiments or in studies done in situ with the naked eye, but it does not provide information on whether or not larvae use cues to find a home, when in their life history they use them, or how far from the reef they can sense the cues. We’re hoping to find out how the larvae behaviorally interact with the blue-water environment minimizing human intervention,” said Paris. “The success of this new device in recording true orientation in fish larvae opens new possibilities for research in the field of larval ecology.”

Working at the Lizard Island Research Station, a satellite-facility of the Australian Museum on the Great Barrier Reef, Paris will directly compare her research methods with those of Lizard Island researcher, Dr. J.M. Leis, who published his results diving and following larval fish. Researchers hope that OWNFOR will provide minimal interference in the natural migration of organisms, helping to understanding just what influences these organisms to settle on a final reef home after days or weeks in a relatively featureless open ocean landscape.

“The larval phase is often the main opportunity in benthic organisms to colonize new habitats, but how far from home are these new habitats? They can range from tens of kilometers away to the natal reef (reef of origin). Ideally, we’ll discover crucial inputs for a new generation of biophysical larval dispersal models vital to achieving a better understanding of larval connectivity in marine systems,” said Paris. “The implications will have global impacts on the effective management of fisheries, conservation of marine biodiversity, including design of marine reserves, and helping to predict the effects of climate change on marine systems.”

Paris earned her master’s degree in biology and living resources from the Rosenstiel School, and her Ph.D. in coastal oceanography from SUNY Stony Brook’s Marine Sciences Research Center. Her current research is also funded by the National Science Foundation’s division of Ocean Science (OCE).