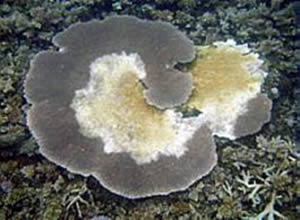 Researchers from the Australian Institute of Marine Science and the ARC Centre of Excellence for Coral Reef Studies at James Cook University have identified the possible cause of a virulent coral disease that until now has been mysterious. Coral disease has emerged as a serious threat to coral reefs, including the Great Barrier Reef, and this research is a step towards understanding it and finding ways to deal with it.

A paper just published in the online peer-reviewed journal PLoS ONE (Public Library of Science) has set out for the first time a possible bacterial cause for some types of White Syndrome (WS), a suite of diseases that have caused significant coral death throughout the Indo-Pacific region.

The authors, Mr Meir Sussman, Professor Bette Willis, Mr Steven Victor and Dr David Bourne, have undertaken the first study to provide evidence for the involvement of particular bacterial agents in WS in the Indo-Pacific region.

White Syndrome is a general term for diseases causing tissue loss that affect many common and widespread scleractinian hard corals. In its worst form, WS can wipe out whole coral colonies. It is known to pose a growing threat to coral reef ecosystems, but its causes have been debated.

The latest AIMS Long Term Monitoring Program status report, released last week, showed continuing outbreaks of WS in a variety of GBR locations and confirmed that the disease often hits the healthy reefs with lots of coral cover. Part of the problem in dealing with coral diseases at present is a lack of knowledge about them.

In other parts of the world, notably the Caribbean, coral disease has been a major factor contributing to the decline of coral reefs, which in some places have undergone ecological "phase shifts" from coral to algal-dominated ecosystems.

Researchers have long speculated that increased human-induced stress on near-shore environments, such as over-fishing, along with the stresses associated with climate change have created ideal conditions for an escalation in coral disease. It may be that an infection can take hold of a coral colony more effectively if it is stressed.

This latest research, carried out in Australia, Palau and the Marshall Islands, has found that WS is linked to the presence of common bacterial species previously shown to cause disease in other reefs around the world.

The researchers had a twofold purpose: to identify possible WS causative agents in the Indo-Pacific using both traditional (culturing) and new (molecular biology) methods and also to investigate the mechanism of infection and therefore in the future develop diagnostic tools that could be used to check on the health of reefs.

They identified six pathogens involved in causing coral death and all were members of a particular class of bacteria called vibrios. This knowledge will form the foundation of a concerted scientific effort into the future to understand and treat coral disease.

"White Syndrome can be devastating for reefs," AIMS researcher Dr David Bourne said. "A coral can lose centimetres of tissue a day once it is infected."

"Finding the cause of the infection is likely to help scientists and reef managers to better understand how to approach dealing with the issue in the future" JCU’s Professor Willis said. "Ultimately, it would be ideal if we could find a cure, but at present we have few tools available to mitigate the impacts of disease on corals," she said.

White syndrome is distinct from the recent widespread phenomenon known as coral bleaching. Bleaching is caused by higher sea surface temperatures, which can interfere with the symbiotic relationship between coral and the algae that lives inside its tissues. White syndrome, on the other hand, is a contagious disease to which corals are susceptible, just as all animals are susceptible to a range of diseases spread by pathogens.