Florida Lab To Release Turtle After A Year Of Rehabilitation; 'We Like To Give Them A Little Base Tan Before They Go Back To Sea' 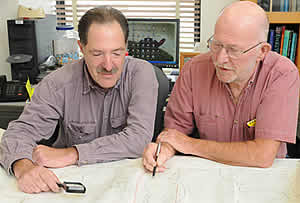 Researchers Peter A. Rosenbaum, left, and Andrew P. Nelson examine one of the many maps used in their 23 years of research on the bog turtle

OSWEGO, New York -- Two SUNY Oswego biologists will use a new $138,000 federal grant to extend their 23-year research of the rare bog turtle and its habitat to Cayuga and Wayne counties.

Peter A. Rosenbaum and Andrew P. Nelson recently received a U.S. Fish and Wildlife Service grant to continue studying the palm-sized reptile, whose state endangered and federally threatened status makes it a symbol in the protection of unique wetland habitats across the Lake Ontario coastal plain.

Rosenbaum, a professor of biological sciences, and Nelson, emeritus professor and former director of Rice Creek Field Station, intend to advance toward recovery goals set by the federal and state governments for this portion of the bog turtles' range. The scientists have confirmed five active, viable sites so far.

"The bog turtle is a unique animal," said Rosenbaum, whose earlier explorations with Nelson and some 30 students over the years have focused on boggy wetland sites around Oswego County. "It's only found in 11 states of eastern North America, and it is arguably North America's smallest and rarest turtle."

The secretive bog turtle spends as much as 90 percent of its life underground in the mucky soils it favors. Prime habitat often is remote and difficult to access.

"This makes detecting their actual presence even more problematic," Rosenbaum said. "To actually find a bog turtle, one needs to be either very lucky or willing to probe the mud and beneath vegetation in places where habitat suggests their presence."

Last month, the researchers published a paper in the journal Northeastern Naturalist titled "Bog Turtle Habitat on the Lake Ontario Coastal Plain." They pooled more than two decades of habitat, genetics and life history studies, as well as digging through archives more than a century old, examining the work of earlier scientists and poring over aerial photographs and maps produced by agencies charged with helping the imperiled bog turtle recover its historic numbers.

Nelson, a botanist and field biologist, said the bog turtle is a habitat specialist that often lives in company with other rare species of animals and plants, such as native wild orchids, that are vulnerable to habitat destruction and other human threats, but which don't enjoy the legal protection of a threatened or endangered species. So it's not just about secretive turtles weighing five or six ounces.

Rosenbaum agreed. "It's about the habitat. The species is the symbol, but the bog turtle's rare habitat is the real issue, and we often confuse symbols and issues in politics and conservation."

The goal of their research is not to use the bog turtle to halt development, the naturalists said. More often than not, developers working near bog turtle sites use a variety of mitigations that allow a project to co-exist in a sustainable way with the bog turtle's rare habitat. Rosenbaum and Nelson often have been called in as consultants.

"It is a misnomer that development is stopped by the presence of a rare species," Rosenbaum said. "When rare species are found, actions are taken that reduce or avoid harmful environmental impacts."

Fortunately, Rosenbaum and Nelson said, most of the known bog turtle sites and some of the historically documented ones are already in public ownership, or are protected by land trusts and/or conservation easements. Besides, these boggy wetlands typically are not very attractive to developers, they said.

The researchers said the goal of the federal recovery plan for the bog turtle is to find a minimum of five additional active, viable populations in this recovery unit, which extends along Lake Ontario west from Oswego County, then south along part of Lake Erie into northwestern Pennsylvania.

The new grant will support the researchers' examination of 130 wetland sites in Wayne and Cayuga counties identified using aerial photography, soil maps and other remote sensing methods. In addition to the field work they conducted last summer, Rosenbaum and Nelson will survey many more wetlands from May to October of next year.