Science Adopts A New Definition Of Seawater; 'Should Be In Widespread Use Within 18 Months' 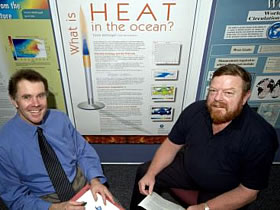 HOBART, Australia -- The science case for a change in the definition of seawater was first agreed to in 2006 when the international guiding body, the Scientific Committee on Oceans Research (SCOR) established a working group, chaired by Dr Trevor McDougall, of CSIRO's Wealth from Oceans Flagship.

"The changes are important because variations of salinity and temperature are responsible for driving deep ocean currents and the major vertical overturning circulations of the world's oceans," Dr McDougall says. "Getting these circulations right is central to the task of quantifying the ocean's role in climate change."

He says the new description of seawater is the result of many years of research into ocean energy and the properties of seawater. This work was mainly done in Germany (Dr Rainer Feistel), the US (Dr Frank Millero) and Australia.

Dr McDougall said the new definition allows, for the first time, an accurate measure of the heat content of seawater for inclusion in ocean models and climate projections.

"To date, ocean models assume that the heat content of seawater is proportional to a particular temperature variable called "potential temperature". The new description of seawater allows us to measure the errors involved by using this approximation while presenting a much more accurate measure of the heat content of seawater, namely Conservative Temperature. The difference is mostly less than 1Âº C at the sea surface, but it is important to correct for these biases in ocean models."

Sea water is a mixture of 96.5 per cent pure water and 3.5 per cent other material, such as salts, dissolved gases, organic substances, and undissolved particles. Salinity, comprising the salts washed from rocks, is measured using the conductivity of seawater. This technique assumes that the composition of seawater is the same in all the world's oceans. It has been known for some time that there are small variations in the composition of seawater around the globe, and the SCOR working group is now in a position to recommend a practical method for taking these variations into account. The changes in salinity, while small, are a factor of about ten larger than the accuracy with which scientists can measure salinity at sea.

Dr McDougall believes the new values for salinity will be in widespread use by 2010.