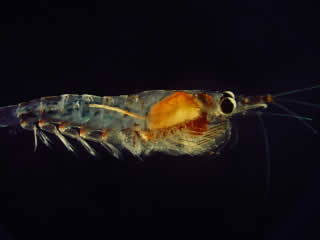 The Antarctic Krill is the best known of the 85 species of krill.

Scientists from British Antarctic Survey (BAS) and Scarborough Centre of Coastal Studies at the University of Hull discovered that rather than doing so once per 24 hours, Antarctic krill 'parachute' from the ocean surface to deeper layers several times during the night. In the process they inject more carbon into the deep sea when they excrete their waste than had previously been understood.

Lead Author Dr Geraint Tarling from BAS says, "We've known for a long time that krill are the main food source for whales, penguins and seals, but we had no idea that their tactics to avoid being eaten could have such added benefits to the environment. By parachuting down they transport carbon which sinks ultimately to the ocean floor – an amount equivalent to the annual emissions of 35 million cars – and this makes these tiny animals much more important than we thought."

Krill feed on phytoplankton near the ocean surface at night but sink deeper in the water column during the day to hide from predators. By knowing how these animals behave, we can understand better the contribution they make to removing carbon from the Earth's atmosphere and upper ocean.