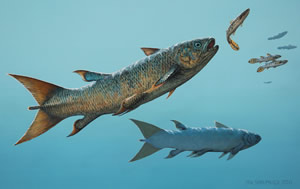 Coelacanths are iconic fishes, well-known as 'living fossils.' The group was thought to have died out with the dinosaurs until a living one was caught in 1938 off the coast of South Africa, sending shock waves through the scientific world. More than 70 years later, a new extinct coelacanth is causing more waves in the scientific community because it had a tuna-like forked tail and was probably a fast-moving, shark-like predator. This contrasts with living coelacanths, which are slow-moving fishes with peculiar broad tails bearing 3 lobes. The most complete fossils of this stunning 240 million-year-old species were found by collectors from the Peace Region Palaeontology Research Centre in Tumbler Ridge, British Columbia, and are described by two University of Alberta scientists in the most recent issue of Journal of Vertebrate Paleontology.

The new form, named Rebellatrix, meaning the 'rebel coelacanth' was a 3-foot long fish with a massive symmetrical forked tail quite unlike the tails of any other living or fossil coelacanths. The structure of this new fish is so unusual that it has been put in its own family. The fossils were discovered on rocky slopes in the Hart Ranges of Wapiti Lake Provincial Park, British Columbia, which at the time the fish was alive was off the western coast of the supercontinent Pangaea.

Rebellatrix represents the first major change in body shape for the coelacanth group in more than 70 million years. The reason for its unusual shape comes down to two possibilities, says lead author Andrew Wendruff from the University of Alberta. Either the fossil record of coelacanths is vastly undiscovered and there are others like it yet to be found, or this was a specific response following the Earth's greatest mass-extinction event at the end of the Permian (250 million years ago), as coelacanths evolved to fill a vacant niche unoccupied by other predatory fishes.

Dr. Mark Wilson, co-author of the study, noted that both the shape and the stiffness of the tail fin are unique amongst coelacanths. Similar tail fins occur today in fast swimming predatory fishes such as tuna or barracuda, strongly suggesting that Rebellatrix was an active predator capable of fast bursts of swimming and high-speed cruising to search for and catch other fishes living in the ancient sea.

"This is an amazing discovery which overturns the age old image of coelacanths as slow moving fishes and shows the resilience of the group to come back in true fighting form after surviving the world's most devastating mass extinction event," says Dr. John Long of the Natural History Museum of LA County, an expert in fossil fishes who was not involved in the study.

Coelacanths are lobe-finned fishes (technically termed sarcopterygians) that straddle the evolutionary boundary between most bony fishes and four-legged land animals (tetrapods). This is based on many characteristics shared by the two groups, such as thick robust limbs, specialised skull features, and a hinged braincase. Coelacanths reached their evolutionary peak back in the age of dinosaurs, but since then are known from just two living forms.