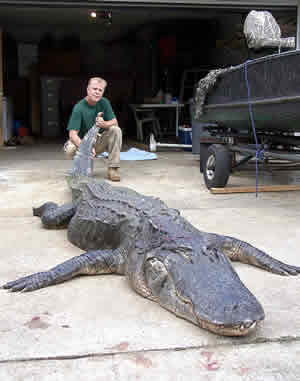 Robert "Tres" Ammerman has been hunting alligators in the Florida Fish and Wildlife Conservation Commission's (FWC) annual statewide alligator harvest for the past seven years. But it wasn't until the last day of this year's season that the Pine Hills resident hit the jackpot and took what he would later learn is the state's longest documented alligator, breaking a 13-year record.

"That was the second luckiest day of my life; the first was when I married my wife, Janette," said Ammerman, a licensed practical nurse at Florida Living Nursing Center in Apopka.

The official measurements put Ammerman's gator at 14 feet, 3½ inches long and 654 pounds. The previous record for length was held by a 14-foot, 5/8-inch alligator taken from Lake Monroe in 1997 by a nuisance-alligator trapper. The heaviest alligator on record weighed 1,043 pounds and was taken from Orange Lake in 1989. It was also taken as a nuisance gator.

This record gator, however, was taken by a hunter drawn for the FWC's Statewide Alligator Harvest Program.

"It took 13 years to break the previous record, but I'm sure there's an alligator out there that will break this one," said Steve Stiegler of the FWC's alligator management program. "When and where it will happen is the only question."

Stiegler said the FWC will be sending Ammerman a letter certifying his record alligator.

Ammerman and his two hunting partners - Sam White, his neighbor, and T.J. Schauf, his nephew, just back from fighting the war in Afghanistan - took the gator just after midnight on Nov. 1 from the Lake Washington area of the St. Johns River in Brevard County.

The trio headed out late Halloween night in Ammerman's 14-foot johnboat equipped with an 8-horsepower motor. They weren't out long before he spotted the large alligator, although at the time it was hard for him to know just how large it was.

"We slid up on him face-on - it's real hard to tell their size from that angle. As we got to within about 3 feet of him I could tell he was big, and just as he dipped into the water, I threw my harpoon and hit him where the neck and head come together," Ammerman said.

The gator took off, but attached to the harpoon was a float and about 50 feet of line. That's when Ammerman, White and Schauf got the ride of their lives.

"The line was spinning off my buoy," he said. "He pulled us around the lake for about 45 minutes before we tried to work him up to the side of the boat."

Ammerman lost a large alligator earlier this season in the same lake when he and his buddies tried to bring the gator in before it was tired out from pulling them and the boat around the lake.

"We didn't want to make that mistake again," he said.

Despite pulling the boat for 45 minutes, the alligator still had plenty of fight when the men finally brought it to the boat.

"He death-rolled and knocked my boat around; it got pretty exciting," he said.

But finally they subdued the big gator, towed it to shore, and entered the record books.