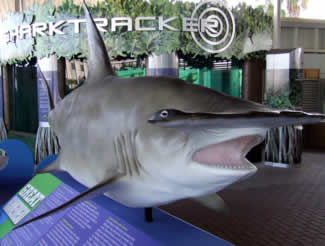 SARASOTA, Florida -- Mote Marine Laboratory has announced that a full-scale fiberglass model of the world record great hammerhead shark donated by a recreational fisherman in May of this year will be added to the shark exhibit area at Mote Aquarium. The 14.5 ft. female shark weighed 1,280 pounds and has been certified by the International Game Fish Association as the “All-Tackle World Record” for great hammerheads caught on rod-and-reel. Although larger hammerheads have been documented in the past by scientists, no larger hammerhead has ever been caught and landed by a sport fisherman with rod-and-reel.

While Mote Marine Laboratory advocates that fishermen catch and release their fish when they can, especially sharks whose populations have been depleted, the donation of this unique specimen presented opportunities for Mote scientists to gain valuable insight into the species. After receiving the shark in May, Mote scientists performed a necropsy and found 55 unborn pups inside the female hammerhead. Larger specimens are often pregnant females, which proved true in this case. Other samples of the shark were taken and preserved for future studies. After these initial investigations, Ocean Creations in Dover, FL, created a plaster cast. The final fiberglass model was then made and set in an educational display at Mote.

While the exact status of great hammerheads in the wild is uncertain, and it is legal to harvest them, experts know that their populations are being depleted due to fishing pressures and habitat loss. This is true not only for hammerheads but for many other of the world’s shark species. The display of this huge hammerhead offers an opportunity to inform the public about the vital role that sharks play in marine ecosystems. The display of this unique shark will impress Mote visitors with its sheer size and design, but Mote hopes it will communicate a message about the magnificence of living sharks. “While this particular specimen is awe-inspiring in size, more importantly, it offers a chance to highlight the need to respect and protect shark populations,” said Dr. Robert Hueter, director of Mote’s Center for Shark Research. “Sharks are in dire trouble worldwide and helping to save these and other large species starts with public understanding. We hope that Mote visitors will come away with a perspective that such large animals should not be allowed to disappear from our planet. Maybe this one shark can help to save the entire species.”

The world record great hammerhead and other shark exhibits can be seen at Mote Aquarium from 10 a.m. to 5 p.m., seven days a week, 365 days a year, including all holidays.