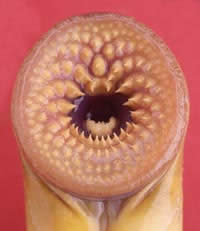 GAINESVILLE, Florida -- It turns out lampreys, long thought to have taken a different evolutionary road than almost all other backboned animals, may not be so different after all, especially in terms of the genetics that govern their skeletal development, according to findings to be published online this week in the Proceedings of the National Academy of Sciences.

UF scientists found the same essential protein that builds cartilage in this odd animal - it spends the first five years of its development in the larval stage before it finally morphs into a boneless fish - is none other than collagen. This vital structural molecule is found in all vertebrates with backbones and jaws, including humans.

"It was thought collagen was a relatively recent invention in vertebrate evolution that unites us with reptiles, amphibians, sharks and bony fishes, while the lamprey skeleton was based on quite different proteins," said Martin Cohn, Ph.D., a developmental biologist and associate professor with the UF departments of zoology and anatomy and cell biology. "Knowing that lampreys also use collagen to build their skeletons makes sense. Lampreys and jawed vertebrates inherited the same genetic program for skeletal development from our common ancestor."

Lampreys live today in the Great Lakes and other freshwater bodies that connect to the sea. But they are considered a nuisance, largely because of their unsettling appearance and demeanor - picture a leech longer than your forearm with a rasp-like mouth that flares open at the end of its body.

Still, the lamprey and its cousin, the hagfish, offer insight into the early Cambrian period 540 million years ago, when multicellular animals first began to make shell and other hard body parts. About 40 million years into the process, jawed and jawless vertebrates branched into different paths from the starting point, like the two ascending lines in the letter "V."

"The lamprey is like the great-, great-, great-aunt descended from the earliest backboned animal," said Michael Miyamoto, Ph.D., a professor and associate chairman of UF's zoology department. "Our question was whether the earliest vertebrates used a collagen recipe or a non-collagen recipe to form their skeletons, and by examining the lamprey, we found a shared recipe. Because of the lamprey, we know it is much more ancient genetic pathway that activates the collagen matrix."

Animal collagen, often associated with the full lips of movie stars, is used for a variety of medical purposes, including reconstructive surgery. But UF Genetics Institute researchers were interested in a material known as type II collagen - the primary structural molecule for jawed vertebrates for at least 500 million years. It is essential in the human body, forming cartilage throughout embryonic skeleton and generally serving as a framework for building bone.

With GuangJun Zhang, Ph.D., a graduate student in zoology, the research team used gene cloning and gene sequencing analysis to demonstrate two type II collagen genes are expressed during the development of the lamprey's cartilaginous skeleton. In addition, they isolated a gene called Sox9, a regulator of collagen gene activity in vertebrates.

The results indicate the collagen-based skeleton evolved before the jawed and jawless vertebrates split into different paths, not afterward. In addition, the research shows that scientists have to dig beyond bone and cartilage to unravel vertebrate relationships, according to Michael Caldwell, Ph.D., an associate professor of earth and atmospheric sciences and of biological sciences at the University of Alberta.

"One of the classic characters in the scientific literature for the past 100 years that has been argued to link all vertebrates, to the exclusion of lampreys and hagfishes, is bone, pure and simple," Caldwell said. "It is the lack of bone in these animals and the supposed uniqueness of their cartilage, that has for so long plagued scientists in their attempts to place them in the evolutionary scheme. An entire taxonomy was created for animals that basically have a head at one end and cartilage to hold it together, but no bone. But this work says the common feature of vertebrates is not the presence or absence of bone, but the presence of a shared gene system that produces cartilage. This conclusion is illuminating and extremely important."