Scientists: Gulf Oil May Be Entering Estuarine Food Chains; 'I Have Never Seen This' 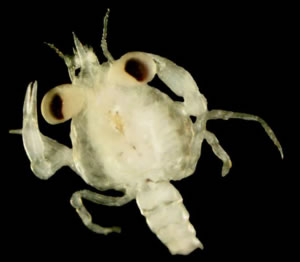 The photo shows the zoea, which represents the offshore larval stage

Scientists at The University of Southern Mississippi and Tulane University have found oil in the postlarvae of blue crabs entering coastal marshes along the Gulf Coast signaling that oil may be entering estuarine food chains.

Harriet Perry, director of the Center for Fisheries Research and Development at the Gulf Coast Research Laboratory (GCRL), has found droplets of hydrocarbons or oil, in blue crab and fiddler crab larvae. According to Perry, the oil appears to be trapped between the hard, outer shell of the crab and its inner skin.

"I've been sampling in Mississippi coastal waters for 42 years and I have never seen this," declared Perry. "My guess is that the crab picked up this oil offshore while in the megalopal (postlarval) stage and brought the oil with it when it came back to the marsh."

Tulane researcher, Dr. Caz Taylor has found orange-colored droplets in megalopae as far east as Pensacola, FL and as far west as Rockefeller Wildlife Refuge in Louisiana, but analysis of these droplets has not been completed.

Perry sent samples to an independent lab in Florida which confirmed the presence of hydrocarbons. While the oil was tested, it was not specifically analyzed for the markers that would pinpoint it to the Deepwater Horizon oil spill. However, Perry believes it is no coincidence that the timing of the oil spill matches finding oil in the crab. The Tulane samples are currently being analyzed at their laboratory and Perry and Taylor both cautioned that additional testing will be required to relate the oil to the recent spill.

Blue crabs are more than just a favorite food for humans; they are also a favorite food of a host of fish species that live in the marsh. Speckled trout and red fish feed heavily on the crustaceans. The food chain is now affected because whatever eats the crab will be affected, and so on.

Besides finding oil in the body of the crab, Perry's group has begun seeing small fish with oil clinging to their bodies. "Oil on the fins decreases mobility and makes these fish easy prey for other species. This is yet another example of oil being incorporated into the food chain," she added.