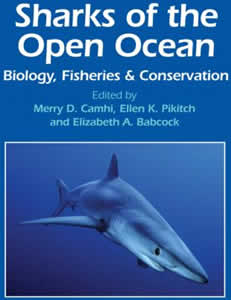 'Sharks of the Open Ocean' documents just how grave the population status of open ocean sharks has become.

NEW YORK, New York -- Oceanic shark populations worldwide are declining from destructive high-seas commercial fishing practices and a rising global demand for shark products (mainly fins and meat), with some shark populations severely depleted and only a few stable or recovering, according to a comprehensive new book co-edited by shark experts from the Pew Institute for Ocean Science (www.pewoceanscience.org), published by Blackwell Publishing, and being released today.*

'Sharks of the Open Ocean' documents just how grave the population status of open ocean sharks has become and finds that current management actions, while working in certain areas, are still inadequate to protect sharks that have roamed the oceans for more than 400 million years—before the first dinosaurs appeared on Earth—and that play an essential role in maintaining ocean food webs. The book features research findings of more than 70 top shark scientists and experts throughout the world and is the first thorough review of the biology, threats, and management outlook for open ocean sharks and rays.

The book reveals how the once abundant, widely distributed open ocean shark populations have declined within just a few decades due to the staggering impact of modern fishing fleets, which routinely deploy miles-long fishing lines into the water. A typical “longline” stretches 50 miles, the length of the entire state of Rhode Island, and has 1,200 baited hooks hanging from it. In 2006, there were an estimated 114 million longline hooks deployed in the Atlantic Ocean, killing not only targeted species but also animals not being sought (known as “bycatch”), including sharks. While death-by-bycatch is the dominant threat to open ocean sharks, pursuit of sharks for their fins and meat is also a growing concern. Demand for these products is putting growing pressure on already depleted species including threshers, shortfin mako, blue and porbeagle sharks.

The editors of this authoritative book call for improved regulatory management to rebuild shark populations before it is too late. 'Sharks of the Open Ocean' was edited by the Pew Institute for Ocean Science’s Dr. Ellen K. Pikitch and Dr. Elizabeth A. Babcock, along with lead editor Dr. Merry D. Camhi.

“The book reveals that many shark populations are in severe trouble due to increasing fishing pressure,” said Dr. Pikitch, Executive Director of the Pew Institute for Ocean Science, a major program of the University of Miami's Rosenstiel School of Marine and Atmospheric Science. “Millions of sharks are killed each year solely for their fins, and that is a key reason why shark populations are plummeting. National and international action is urgently needed now to halt these losses.”

Until recently, many species of sharks and rays, particularly those that spend significant time in open ocean waters, have been a mystery to humans due to difficulties in studying their remote movement patterns and life histories. 'Sharks of the Open Ocean' documents that high-seas sharks are the predominant species captured by a wide range of commercial fishing methods, and they are among the most popular species used for shark fin soup in Asia. Oceanic sharks are particularly at risk from overfishing because they are caught in international waters where there are no limits on the amount of sharks taken.

The 11 species of sharks and one stingray addressed in this book live part or all of their lives in waters distant from continental land masses. Most are “apex predators,” at the top of the oceanic food chain and very important in maintaining ocean food webs. “Open ocean sharks play the same role on the high seas that wolves and lions play on land,” said Dr. Elizabeth A. Babcock, Chief Scientist of the Pew Institute. “They are the top predators, so when their populations crash, their ecosystems become less healthy.”

'Sharks of the Open Ocean' compiles a wealth of fascinating information about the biology of ocean-going sharks, from the charismatic white and mako sharks to the poorly known pelagic stingray. These sharks migrate thousands of miles across entire ocean basins, the book reveals. Other studies in the book suggest that there are areas of the open ocean where these sharks congregate for feeding, mating and giving birth, indicating that closing such areas to fishing would be a useful conservation step. The book also highlights some approaches adopted by experts working to protect sharks and rays, and provides a roadmap for effective management of these magnificent predators in the near future.

Important management progress has been made in recent years, with more than 20 countries and 9 regional fishery organizations banning the wasteful practice of finning (slicing off the fins and returning the carcass to the sea). “These finning bans are a great first step if properly implemented,” said Dr. Merry Camhi. “But as this synthesis of the available status and management information demonstrates, recovery of already depleted oceanic shark populations will demand precautionary catch limits and other measures at both the domestic and international level to reduce fishing mortality.”

Shark populations can recover from overexploitation, Dr. Babcock said, pointing to a 1991 United Nations ban on high seas driftnet fisheries that probably allowed salmon sharks in the North Pacific to rebuild, and current domestic management measures that appear to be keeping the population stable.

Sharks and rays of the open ocean remain among the least studied predators, said Dr. Pikitch, and this book is a critical contribution to the body of knowledge. “My hope is that this book will accelerate understanding of the role sharks play, and hasten the implementation of research and conservation measures needed to protect them,” Dr. Pikitch said. “Sharks of the open ocean can recover if we give them with a chance with decisive management action.”