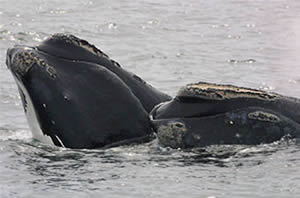 A landmark regulation going into effect on Dec. 9 will require ships 65 feet or longer to travel at 10 knots or less in certain areas where right whales gather. These new speed restrictions will take effect in waters off New England beginning in January 2009 when whales begin gathering in this area as part of their annual migration. The goal is to reduce the chances ships will collide with whales, injuring or killing them.

With only 300 to 400 in existence, North Atlantic right whales are among the most endangered whales in the world. Their slow movements and time spent at the surface and near the coast make right whales highly vulnerable to being struck by ships, especially since shipping lanes into East Coast ports cut across their migration routes.

The speed restrictions apply in the following approximate locations at the following times; they are based on times whales are known to be in these areas:

NOAA also will call for temporary voluntary speed limits in other areas or times when a group of three or more right whales is confirmed. Scientists will assess whether the speed restrictions are effective before the rule expires in 2013.

The rule is part of NOAA’s broader effort to help the right whale population recover by protecting their habitat and reducing chances of ships colliding with right whales and of right whales entangling in fishing gear. Existing protective actions include surveying whale habitat by aircraft, mandatory ship reporting systems that provide advisories and information on right whale locations to mariners, shifting shipping lanes into Boston, recommending shipping routes into other coastal areas to prevent collisions, and regulations to prevent entanglement in fishing gear.