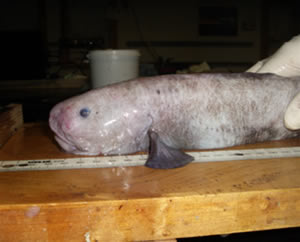 One of the new fish species discovered by Dr. King

ABERDEEN, Scotland -- A sharp eyed marine scientist who spotted six strange fish during a deep sea research expedition has been rewarded for trusting her instincts.

After painstaking work with three taxonomy experts, Dr Nikki King discovered they were – until now – completely unknown to science.

The fish were among marine life landed by the team during a trawl of a stretch of the darkest depths of the Southern Indian Ocean aboard the Royal Research Ship Discovery.

The scientists were carrying out research for the Benthic Crozet project which is a major exploration of the waters and ocean dwellers off the Crozet Islands.

Dr King from the University of Aberdeen's Oceanlab was among those responsible for examining any marine creatures caught.

She said: "I could only identify the six so far – not down to species level. So we packed them into preservative and took them home."

The Research Fellow then worked closely with Dr Peter MÃ¸ller and Professor JÃ¸rgen Nielsen of the Zoological Museum, University of Copenhagen, and Professor Guy Duhamel of the Paris Natural History Museum before the three confirmed the six were indeed new to science.

Dr King said: "Ever since I set my heart on becoming a marine biologist I hoped I would discover one new species, so to have discovered six is tremendously exciting!"

Nikki and her taxonomy collaborators then had the honour of naming the deep sea creatures.

As a result, Professor Monty Priede, Director of Oceanlab, can take great pride in the knowledge that somewhere in the deep lurks a pink eelpout bearing the name Pachycara priedei.

Professor George Wolff from the University of Liverpool – who led the research expedition – was the inspiration for the snailfish now called Paraliparis wolffi.

But of the six the closest to Nikki's heart was a large 42cm long brown eelpout now known as Pachycara cousinsi which was named after the 27-year-old's geophysicist fiancÃ© Michael Cousins.

Professor Priede, who also has an eponymous two-headed parasitic worm, is delighted to be immortalised once again. He said: "We are used to discovering new species as we explore the deep sea but usually they are small worms and shrimps.

"Finding six new fishes in one expedition is remarkable.

"The team were fishing in an area that had only been sampled once previously during the voyage of the HMS Challenger 132 years ago.

"Dr King did very well spotting the significance of these fishes among the catches.

"For a zoologist having a species of animal named after one is the ultimate professional accolade, I am, delighted that a little pink fish now carries my name."