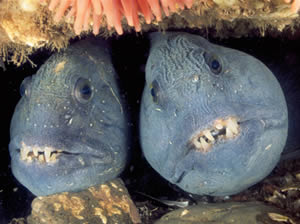 BOSTON, Massachusetts -- The Conservation Law Foundation (CLF) and others today filed a scientific petition with the federal government seeking endangered species protection for the Atlantic wolffish, a fish threatened with extinction due to years of overharvesting and habitat loss due to modern fishing gear. If the petition is successful, this will be the first listing of a marine fish as an endangered in New England.

With a long eel-like tail and a mouth full of large canine teeth, the wolffish (Anarhichas lupus) is one of New England ’s most unique ocean fish species and also one of the most endangered. CLF’s petition cites federal and independent scientific studies that show, over the past twenty years, dramatic declines in wolffish population and destruction of the deep underwater habitat that the fish needs to successfully reproduce and survive.

Based on all available science, Atlantic wolffish are rapidly headed toward extinction in New England’s ocean waters,” said Peter Shelley , CLF Vice President and Senior Attorney. “The dramatic decline in wolffish is a troubling indication that while there is some good news about marine species like haddock and sea scallops that have been successfully restored, our ocean’s long term health continues to hang for other species by a precarious balance. Key species like the wolffish and endangered whales remain in serious jeopardy.”

According to federal statistics, the number of wolffish landed by commercial fishermen has dropped 95% from over 1,200 metric tons in 1983 to just 64.7 metric tons in 2007. More critically, wolffish have virtually disappeared from the annual scientific research trawls that take place twice a year in the state and federal waters of the Atlantic Ocean off the New England coast. In addition to fishing, habitat alterations are also suspected as a major threat to the wolffish. One scientist has estimated that virtually every inch of the seafloor in New England ’s ocean waters was impacted by commercial trawling (in which football field-sized nets are dragged through the ocean) between 1984 and 1990.

Given the widespread destruction of seafloor habitat in the Gulf of Maine, the habitat available to sustain Atlantic wolffish populations has been greatly reduced,” wrote marine scientist and co-petitioner Dr. Les Watling in a scientific affidavit attached to the petition. “Absent some action to reduce or eliminate the destruction of seafloor habitat in the few remaining areas of United States waters that harbor remnant populations of the Atlantic wolffish, it is probable that it will be faced with extinction in those waters in the near future.”

The wolffish, which has evolved with natural anti-freeze to keep its blood flowing in the 250-400 foot deep, ice-cold water it calls home, can live up to 20 years and weigh as much as 40 pounds. Unlike most fish which broadcast millions of eggs into the water to be fertilized by the male and then abandoned to their fate, wolffish pair up to reproduce and fertilization is believed to occur inside the female. After they are laid on the ocean floor, the male then protects the eggs and young in a nest for four to nine months.

We can't afford to lose the Atlantic wolffish and the unique role it plays in regulating other species in the ocean ecosystem,” said Dr. Erica Fuller, a co-petitioner. “Our petition presents the federal government with the opportunity to take targeted action in very specific places to protect and restore the existing populations of this special fish.”

An endangered species listing under the Endangered Species Act would require federal agencies to implement a recovery plan to protect and restore the wolffish, as well as to designate and protect critical habitat on which they depend for survival.