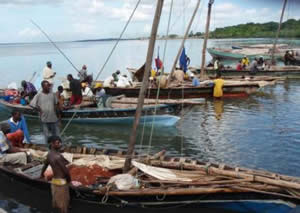 According to a new study, coral reefs next to "middle class" communities in Eastern Africa have the lowest fish levels. Credit:Tim McClanahan

According to a study by the Wildlife Conservation Society (WCS) and other organizations, researchers discovered a surprising correlation between "middle class" communities in Eastern Africa and low fish levels. Curiously, areas with both low and high socio-economic levels had comparatively higher fish levels.

The study is by Josh Cinner of James Cook University (JCU), Tim McClanahan of the Wildlife Conservation Society (WCS), Tim Daw of the University of East Anglia, Nick Graham of JCU, Joseph Maina of WCS, and Shaun Wilson and Terry Hughes of JCU.

In a comparison between villages, researchers found that communities with intermediate levels of infrastructure had the lowest fish levels in their adjacent reef systems—up to four times lower than sites of low and high levels of development.

"This is a significant finding on how socio-economics can influence reef fisheries in surprising ways," said Dr. Tim McClanahan, a WCS coral researcher and co-author of the study. "It also shows the importance of combining ecology with social science for conservation planning on a regional scale."

The explanation, said researchers, lies in the interplay between traditional customs and how growth influences the social fabric of communities. In poor communities, many of which rely heavily on marine resources, fishing levels are kept in check by local cultural institutions and taboos and a reliance on traditional, low-tech fishing methods. Increases in wealth often reduce a community's dependence on fishing, but it can also increase the number of motorized fishing vessels and fishing gear such as handlines.

Economic growth during the early stages can also erode cultural restrictions on overfishing, according to the authors. The net result: fewer fish. Among the countries studied, Kenya in particular, has experienced a sharp decline in cultural restraints and a subsequent increase in unrestrained and destructive fishing techniques.

The most affluent communities, by contrast, become less dependent on marine resources and more diversified economically, with more salaried positions and economic opportunities. Wealthier communities also possess higher levels of technology—larger boats that enable fishermen to fish on the open sea—and an increased awareness on the importance of coral reefs on ecological health.

The U-shaped curve in fish biomass with respect to socioeconomic levels approximates what is known as an environmental "Kuznet curve," which is adapted from a graphical model that measures economic inequalities in developing countries driven by the extent of a countries economic influence.

Predictably, the research also found that fish levels were always negatively but not strongly affected by high human population density. And protected marine sites with no fishing had fish levels three times higher than sites where fishing was permitted.

"Coral reef fishery management will depend not just on fishing laws but also on improving human welfare and institutional capacity through appropriate socioeconomic development" added McClanahan. "Governments, donors, and other agencies help communities avoid 'poverty traps' through investments in programs and alternatives to reef-based livelihoods, where obvious examples include infrastructure developments such as schools and hospitals."