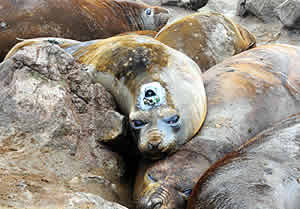 The satellite tag attached to the fur of this southern elephant seal can collect data for a year. Photo by D. Costa.

SANTA CRUZ, California -- Oceanographers are using data collected by elephant seals to improve their map of the seafloor on Antarctica's continental shelf. The new map results from a collaboration between Daniel Costa, a professor of ecology and evolutionary biology at UC Santa Cruz, who has been studying southern elephant seals in the region, and oceanographer Laurie Padman of Earth & Space Research in Corvallis, Oregon.

Between 2005 and 2009, Costa tagged 57 southern elephant seals with satellite transmitters as part of a habitat ecology study. "We were interested in the animals--where they went and what they did," he said.

When the Wilkins Ice Shelf extending from the Antarctic Peninsula began to crumble in 2008, Costa realized that the data collected by his tagged seals might help oceanographers figure out why the shelf was collapsing. "I knew that we had animals that had been swimming around and collecting data in that area," he said.

Costa's research focuses on the food-web relationships that support large ocean predators like elephant seals and how climate change affects them. He developed and pioneered the satellite tags used in the study in collaboration with the Sea Mammal Research Unit at the University of St. Andrews, Scotland. The tags record temperature, salinity, and pressure data wherever the animals roam. Attached to the seals' fur, the instruments collect information for one year before being shed along with the fur in an annual molt.

The tags store data as the elephant seals dive to the bottom to search for food and then transmit it to a centralized database via the Argos satellite system when the animal surfaces. Costa's study gathered data over a period of four years, during which the seals made tens of thousands of dives to the ocean bottom. As the researchers analyzed the data, a picture of the seafloor emerged that didn't match the existing maps. The animals were diving to depths that, according to the maps, were below the sea floor.

The extreme conditions around Antarctica make seafloor mapping a challenge. Traditionally, ships pass over an area and take direct measurements to chart the ocean floor, but the icy waters around the Antarctic Peninsula are difficult to navigate, so many of the areas around it are charted based only on estimates gleaned indirectly from satellites.

When the Wilkins Ice Shelf began to disintegrate, oceanographers analyzing the waters below it needed an accurate picture of the seafloor to understand the currents swirling under the ice shelf. Thinking his data might help, Costa contacted Padman, and they began to piece together an improved picture of the ocean floor around the Antarctic Peninsula.

For Costa, the satellite tags provided valuable information about how the Southern Ocean is changing and how large animals like the elephant seals may respond to those changes. For Padman, the seals let him see an ocean floor previously inaccessible to man. And for both, the exercise revealed a new application for an existing technology that is likely to be used again in the future. As a pioneer of this technology, Costa said that he is always looking for ways to push the technology along in support of better science.

This research was supported by grants from NASA and the National Science Foundation's Office of Polar Programs.