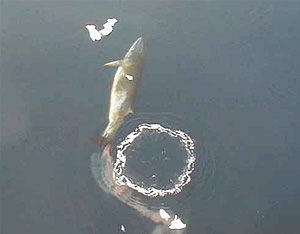 The important role whale poo plays in the productivity of the Southern Ocean has been revealed in a new study.

Scientists from the Australian Antarctic Division and the Antarctic Climate and Ecosystems Cooperative Research Centre (ACE CRC) are looking at how krill and whales contribute to the recycling of iron in the Southern Ocean.

Iron is a critical element in the ocean that enables the production of aquatic plants, known as algae, which absorb carbon dioxide (CO2).

When algae die they sink and strip iron from the surface of the ocean, but much of the algae is eaten by krill, which in turn become prey for larger animals such as seals, penguins and whales.

"We found that krill concentrated the iron they consumed in their bodies and because they swim near the surface, they keep the iron in the top layer of the ocean," Dr Nicol said. "There's huge amounts of iron in whale poo."

"Approximately 24% of the total iron in the Southern Ocean surface water is currently stored within krill body tissue."

The most recent estimates of krill biomass in the Southern Ocean is 379 million tonnes, storing about 15,000 tonnes of iron.

"When whales consume the iron-rich krill, they excrete most of the iron back into the water, therefore fertilizing the ocean and starting the whole food cycle again," Dr Nicol said.

"The baleen whales' fecal iron concentration is calculated to be about 10 million times that of Antarctic seawater," he said.

Before commercial whaling began early last century whales used to consume about 190 million tonnes of krill, converting this into about 7,600 tonnes of iron-rich feces.

"This monumental fertilizing effort means the whales may have been responsible for recycling about 12% of the current iron content in the surface layer of the Southern Ocean," Dr Nicol said.

The recycling role of krill and whales in the ocean helps to explain how the ecosystem was able to support far larger populations of both predator and prey.

The research suggests that, in future, increasing populations of baleen whales and krill would have a positive effect on the productivity of the entire Southern Ocean ecosystem and could improve the ocean's ability to absorb CO2.