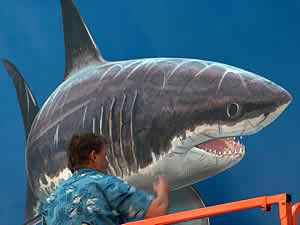 FORT LAUDERDALE, Florida -- With shark populations around the world continuing to spiral downward, the result of devastating commercial fishing techniques and an exotic taste for 'shark-fin soup', marine scientists such as Dr. Guy Harvey, are working around the clock to give these magnificent animals a fighting chance for survival.

In his latest mission, Dr. Harveyâbetter known throughout the world as a celebrated and award-winning marine wildlife artistâhas brought his cause into the epicenter of one of the nation's oldest and largest shark fishing tournaments in Ocean City, Maryland on June 15-19.

Thanks in part to Dr. Harvey's efforts and a willingness to continue to adapt by the tournament founders and organizers, The Ocean City Shark Tournament's cash and prize package payment in the catch and release division has increased to over $15,000.

The Ocean City Shark Tournament will continue to feature two divisions that allow anglers to bring sharks to the scales. However, knowing that competitors tend to pursue whatever division has the biggest payout, tournament directors are looking to make the release division cash and prizes so attractive that, by their own choosing, fishermen will voluntarily opt to release more sharks.

"We applaud the tournament founders and directors for their increased commitment to promote the catch and release of sharks in this summer's tournament," said Dr. Harvey. "Our goal is to minimize shark mortalities and maximize educational outreach about shark conservation."

Earlier this month, Captain Mark Sampson and other directors of the 31st Annual Ocean City Shark Tournament conducted a catch and release clinic to show how to handle sharks in a manner that's safe for both fish and fishermen.

"To ensure that everyone who releases a shark get the recognition they deserve, in this year's OC Shark Tournament all fishing teams will have the chance to step into the "Release Pavilion" on the dock at the weigh-ins to have press photos taken and their releases announced to the crowd," said Sampson. "Anyone who goes out in the tournament and releases a shark deserves recognition, and were going to make sure they get it."

In 30 years, the Ocean City Shark Tournament has evolved from a small "club" event to one of the largest shark tournaments along the east coast. In the early years, only trophies and new rods and reels were given out to winners. Last year, more than $142,000 was awarded to the top anglers in the tournament. Over the years, tournament organizers have promoted conservation and have continued to update and fine tune rules to maintain minimum size limits (higher than what government allows fishermen to take) as well a regulate gear. This year, for example, all fishermen will be required to use circle hooks so that released sharks that won't qualify for prizes have the best chance for survival. Minimum size limits have also been increased to help keep some of the smaller sharks (that won't qualify for prizes) from being brought in. There will also be a daily cash reward for the most sharks released on each of the three fishing days. A cash reward will also be given out for the most Mako sharks released.

Dr. Harvey, founder of the Guy Harvey Research Institute at Nova Southeastern University and the internationally regarded Guy Harvey Ocean Foundation (GHOF), in recent years has joined the growing ranks of individuals and organizations calling for strict regulations to ban the commercial fishing of all sharks in The Bahamas. Scientists with the International Union for Conservation of Nature have estimated that 30 percent of shark and ray species around the world are threatened or near threatened with extinction. The loss of these animals could cause irreversible damage to the ocean's ecosystem and result in the loss of hundreds of millions of dollars in the tourist trade.

In related shark conservation activity, Dr. Harvey offered his artistic talent and foundation sponsorship funding in support of the recent Circle Hook Symposium held in Miami. The symposium, hosted by the National Oceanic and Atmospheric Administration (NOAA), is an international gathering of scientists, resource managers and constituents convening to discuss the performance and use of circle hooks in commercial, recreational and artisanal fisheries. While it is legal to use a J-hook to fish for sharks, experts such as Dr. Harvey recommend using a circle hook, where the barb points inward and not outward.

Dr. Harvey's message regarding shark protection initiatives is heard loud and clear in the recently released documentary "This is Your Ocean: Sharks", co-staring fellow artist Wyland and photographer Jim Abernathy. The 44-minute documentary, which premiered at the Newport Beach Film Festival to positive reviews, depicts sharks in their environment capturing both adventure and passion and providing the audience with face-to-face realism never shown before on film. To view the trailer of the documentary, go to http://www.youtube.com/watch?v=IPdZVnkoMCM.