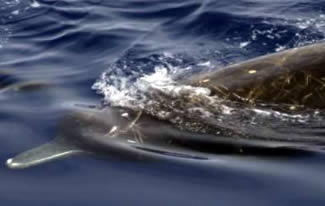 Some of these scars could have been inflicted by orcas, their potential predators, or by squids, their most common preys 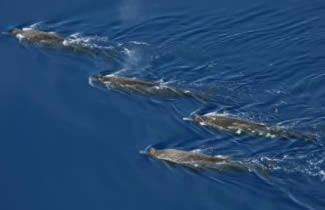 On the 17th of December, Meike Scheidat & Linn Lehnert, the whale watchers on board of Polarstern, made a remarkable cetaceans sighting: Four Arnoux's Beaked Whales (Berardius arnuxii), observed from the helicopter.

The Arnoux's Beaked Whales is one of the least known species of the Beaked Whales family (Ziphidae), itself poorly known in general. Arnoux's is one of the biggest species amongst beaked whales. The ones observed were probably 9 metre long. These deep-sea feeding whales are particularly sensitive to underwater acoustic disturbances. The pictures showed a whole array of scars on their skin, which are already under investigation. Some of these scars could have been inflicted by orcas, their potential predators, or by squids, their most common preys, as proposed by Elaina Jorgensen one of our cephalopod specialist onboard. Other scars could be caused by cookie-cutter sharks, which would imply big migration between the subtropical waters where these sharks are found and the ice-edge (64°06 S) where they were observed.

After crossing the Atlantic and the sea ice of the Atka Bay Polarstern supplied the German research station Neumayer on the Ekström Ice Shelf with food and fuel. Helicopters brought up hoses to refill eight 20,000-liter tanks with diesel fuel. The tanks were sitting on sledges ready for later transportation to the station by Caterpillars. The cargo had to be loaded on a secure area on the sea ice as ice conditions did not allow Polarstern to enter the "ice port" right next to the shelf edge.

A Spanish team of scientists seized the opportunity of a small patch of open water to catch live animals for observation in aquaria. They will investigate sessile cnidarians living on the seafloor. The main objective is to find out whether these animals are exclusively feeding on fresh algae from the summer bloom or can they also utilize other food sources under conditions of extended periods of sea ice cover. These findings will be a substantial contribution to answer much broader questions such as how did communities adapt to the particular conditions beneath the Larsen Ice Shelves and how do they differ from "normal" areas. A catch with the Agassiz trawl was bountiful and also provided sponges, the most distinct group of animals living on the seafloor in the shelf ecosystem. As the first working groups are supplied with organisms scientific work is running.

On the way to the Antartic Peninsula where the major scientific work will be running Polarstern carried out more than 75 thirty-minute trawls. Length measurements, weight and gender determination, stomach content analyses and the removal of tiny ear bones for age structure analyses are done on board. The sum of the scientific data will provide a comprehensive indication of the fish population dynamics since the end of Antarctic commercial fishing in 1990. The bottom fish survey conducted during ANT XXIII/8 is the seventh survey in a row in the southern Scotia Arc region. The survey contributes to the 'Convention on the Conservation of Antarctic Marine Living Resources' (CCAMLR). This organization is responsible for the conservation and rational use of all Antarctic marine resources with the exception of cetaceans. Germany focuses its CCAMLR-related research on the state of fish and krill stocks in the Atlantic sector of the Southern Ocean. This research is conducted by the Seafisheries Institute of the Federal Research Centre for Fisheries in Hamburg on behalf of the Federal Ministry of Nutrition, Agriculture and Consumer's Protection in cooperation with foreign institutions, such as the Southwest Fisheries Science Centre of the National Marine Fisheries Service in La Jolla, USA.