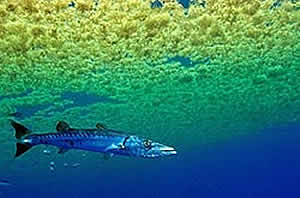 MIAMI, Florida -- For anglers and boaters who regularly travel the coasts of Florida the great barracuda (Sphyraena barracuda) is a common sight. Surprisingly, however, very little is known about the early life stage of this ecologically and socio-economically important coastal fish.

"Due in large part to the expense and difficulty of collecting fish larvae from the open ocean, the larval ecology of barracuda were a mystery until now," said D'Alessandro. "A research study led by Dr. Robert Cowen, which sampled the Straits of Florida regularly for two years, provided a unique opportunity to catch a glimpse of the larval life of many fishes."

In their larval stage, which generally lasts several weeks, barracuda and sennets remain in the upper 25 m of the ocean and live on a similar diet. They start out consuming copepods, or small crustaceans, but make an early switch to a diet of fish larvae, much like several larval billfishes and tunas.

"Barracuda are an important element in the marine food chain; they are voracious predators of other fishes as juveniles and adults on reefs and other nearshore habitats. Now we know this holds true for their larval stage before they reach an inch in length, as well," said D'Alessandro. "This novel study unlocks important aspects of the barracuda's life cycle. It also identifies an important size advantage within the larval stage (bigger larvae are more likely to survive) and provides insight that resource managers can use to better manage this species."